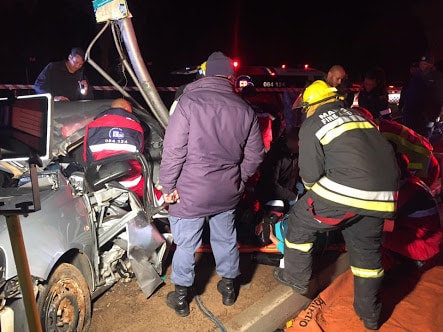 10 people were injured on Sunday evening after a taxi and two light motor vehicles collided at the Rissik and Commissinor Road intersection in Johannesburg CBD.

ER24 paramedics, along with other services, arrived on the scene and found all three vehicles in the middle of the road. The taxi was found lying on its side.

On inspection, paramedics found that the occupants from the taxi had already climbed out of the vehicle and were walking around on the scene.

On assessment, paramedics found that 10 patients in total had injured in the collision. Fortunately, the injuries sustained were only minor.

Paramedics treated the patients on scene and thereafter transported them to various provincial hospitals for further treatment.

The exact cause of the collision is not yet known but local authorities were on scene for further investigations.

Cape Town – A survey has named the worst performing apps that…

Durban – A Durban based truck business owner, his son and six…