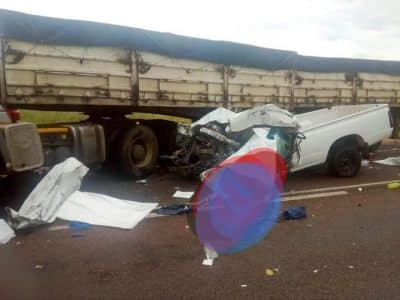 Eleven people have been killed in a head-on collision between a truck and a bakkie on N11 in Grobersdal, Limpopo on Monday.

The collision happened when the bakkie was transporting workers to a nearby farm.

It has been reported that the truck unsafely attempted to overtake and collided head-on with the bakkie.

Eleven people have been killed in a crash on the N11 road in Groblerdal in Limpopo. It is believed that a truck attempted to overtake another vehicle when it collided with a bakkie that was transporting workers to a nearby farm.#sabcnews

Authorities are however investigating the crash.

Paramedics reported that all eleven died on the spot.

The truck driver was not injured.

Over 200 military trucks, trailers, Nyalas and other military equipment burned to…
Total
4
Share
4
0
0
0
0