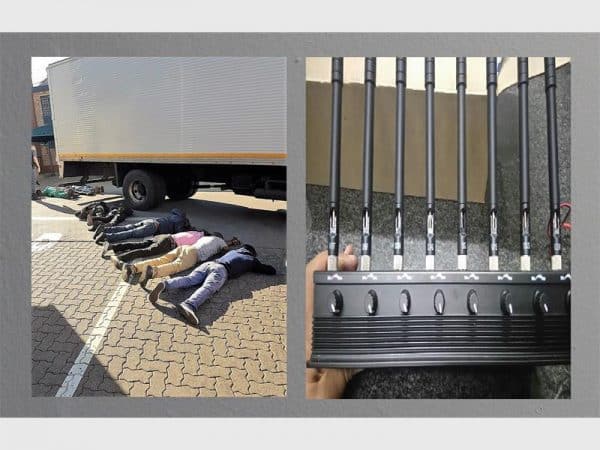 The EMPD pounced on 12 men who were offloading cargo from a horse and trailer that was hijacked in Dawn Park.

EMPD spokesperson Lieut-Col Wilfred Kgasago said that approximately 16 men assailed a business in Dawn Park on Saturday, August 13, where the victims were tied up and their cellphones taken before two trucks – each with two trailers – were hijacked.

The thieves used a jammer connected to a 12-volt battery intended to immobilise the tracking system.

However, it failed as the tracking system still managed to locate the two trailers in Jet Park where 12 suspects where found offloading the loot.

“Twelve suspects were caught in the act offloading the cargo of household cleaning products within the premises of Palisades Business Park in Jet Park,” said Kgasago.

Kgasago said the arrests and the recovery took place on Sunday, August 14, at around 3pm, due to the efforts of the EMPD Equestrian Unit and SAPS Flying Squad members.

The recovered goods, valued at R200 000, were given back to their rightful owners.

Among the arrested suspects were locals and Mozambican and Zimbabwean nationals whose ages range from 22 and 41.

All the suspects were detained at Boksburg North Police Station after charges of possession of stolen goods and vehicles were laid against them.

They are expected to appear in the Boksburg Magistrate’s Court soon.

A light delivery truck burst into flames on the M13 in Hillcrest,…

I am parked here at Harrismith on the N3, I won’t say…