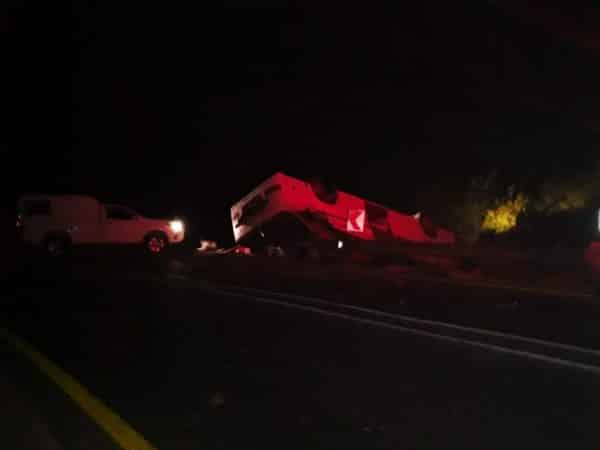 Limpopo – Fourteen Zimbabwean nationals including children, were killed and 36 others injured when the bus they were traveling in overturned on the N1, Limpopo on Monday.

The incident happened in Louis Trichardt.

This follows another accident in Modimolle, Limpopo just before Easter when 10 Zimbabwean nationals died when a truck collided with a minibus they were travelling in and burst into flames.

According to ER24 spokesperson Shawn Herst, ER24 paramedics, along with several other services, arrived on the scene to find the bus lying on its roof off the roadway.

“Numerous patients were found lying around the scene,” Herbst said.

Herbst added that 36 patients who had injuries ranging from minor to critical were assessed and treated on the scene by ER24 paramedics and other medical services.

“Several patients had sustained fatal injuries on the scene while several others succumbed to their injuries at nearby hospitals,” Herbst said.

“Once treated, the patients were transported by various services to nearby hospitals for further care,” he added.

Limpopo Department of Transport MEC, Makoma Makhurupetje said no conclusive evidence has been found which points to the exact cause of the accident.

“We are deeply concerned about accidents involving buses as they lead to more loss of lives compared to ordinary motor vehicles,” Makhurupetje said.

“The driver and vehicle fitness of long distance cross border buses is also a matter of deep concern to us, as this is almost the third time now that we are losing lives because of long distance buses,” she added.

Makhurupetje extended her condolences to the families of the deceased.