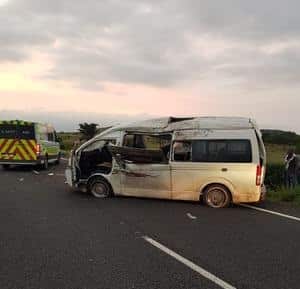 15 injured in taxi accident on N3 at Bergville

Fifteen people were injured on Monday morning when the taxi they were travelling in rolled over on the N3 highway near the Bergville toll plaza, about 20km outside Ladysmith in KwaZulu-Natal, emergency service ER24 said.

Paramedics dispatched to the scene found the taxi upright on the side of the road after rolling from the opposite lane, ER24 spokesman Russel Meiring said in a statement.

“Several passengers had been ejected from the vehicle… Medics assessed the patients and found that four people had sustained critical injuries while eleven others had sustained minor to serious injuries,” Meiring said.

Those injured were treated at the scene with pain relief medication before being transported to hospital for further care.

“The details surrounding this incident are not yet known to our paramedics, but local authorities were on the scene for further investigations,” Meiring added.

Three people have been tragically killed in a crash this morning, 24…

6
Two men, believed to be tow truck crew, have been killed after…