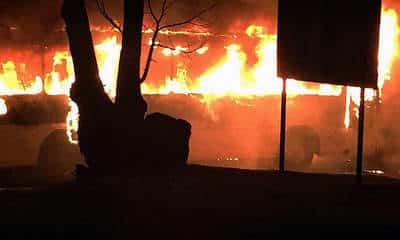 “We can confirm that 19 of our buses have been burnt during protest in Mamelodi. None of our drivers were injured and we will assess the extent of the damage on Tuesday,” marketing and sales executive Nozipho Jafta said.

Gauteng police could not immediately be reached for comment.

Jafta told News24 the buses were used for the afternoon shift.

“They were set alight on their way to the depot. The drivers ran away.”

The City of Tshwane had contracted the company to provide a bus service.

Jafta said the company’s officials could not reach the buses to asses the extent of the damage because protesters had blocked roads.

Autopax had suspended all its operation in Mamelodi until calm was restored.

The violence was believed to be related to the ANC’s decision to nominate Thoko Didiza to replace Tshwane mayor Kgosientso Ramokgopa after the August 3 local government elections.