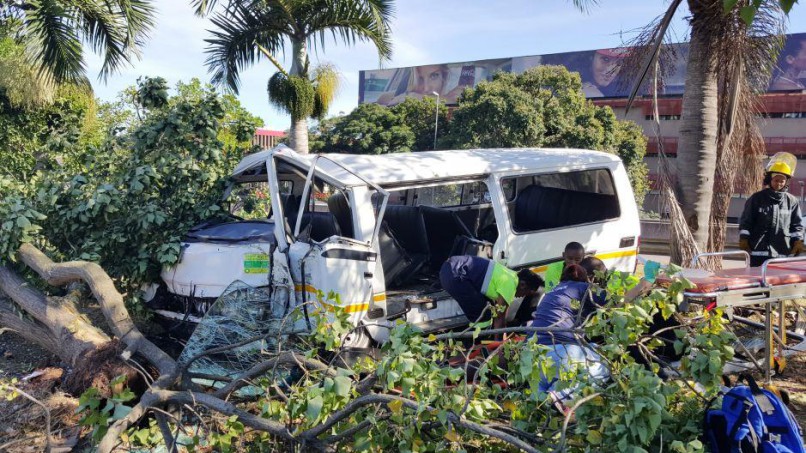 Nineteen people were injured on Monday after a taxi collided with a car before leaving the road and hitting a tree on the offramp to Brickfield Road from the N3 just after 1pm in Durban, Road Safety said.

“Rescue Care Paramedics arrived on the scene to find that the taxi had collided with a vehicle before leaving the roadway into bush colliding with a tree on the offramp. Nineteen people had sustained various injuries with one patient sustaining serious injuries. More ambulances were dispatched as well as Advanced Life Support units,” Road Safety operations director, Garrith Jamieson said.

Jamieson added that once all of the injured had been stabilised on the scene, they were transported to various Durban hospitals for the further care that they required.

“It is unknown what caused the accident however SAPS as well as Metro Police were on scene and will be investigating further,” Jamieson said.

Meanwhile, Minister of Transport Dipuo Peters and the Road Traffic Management Corporation (RTMC) have urged all motorists to heed road rules after more than 30 people died on the roads during the long weekend.

Peters said on Monday that the RMTC was investigating the five horrific crashes that left over 30 people dead and many injured.

Durban – The N2 and N3 highways were brought to a standstill…

Durban – The South African Weather Service has issued a warning for…