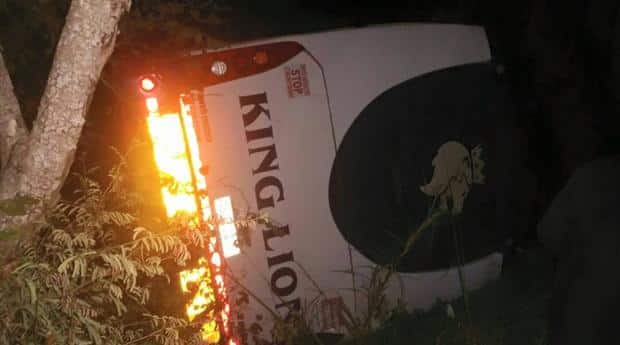 Harare ‑ Forty three people died and 24 others were injured when the driver of a Zimbabwe-registered bus lost control of the vehicle before it veered off the road and rammed into a tree, authorities confirmed on Thursday.

National police spokesperson, Senior Assistant Commissioner Charity Charamba, said the accident, which involved a King Lion bus which was on its way to Zambia, occurred on Wednesday night along the Harare-Chirundu Highway, around the Nyamakate area, about 30 kilometres before Makuti.

“The driver of the bus failed to negotiate a curve, leading to him losing control of the bus and hitting a tree before overturning,” she said.

It was suspected the driver was speeding and as a result, failed to successfully negotiate the curve.

Those with minor injuries were taken to Karoi District and Chinhoyi Provincial hospitals, while the seriously injured were said to have been transferred to Harare.

In the past years, King Lion has been involved in a number of fatal accidents.

In July 2015, eight passengers died and 53 others were injured when one of the company’s buses, which was heading towards Harare, suffered a tyre burst and overturned along the Chirundu road, after the Kafue Gorge in Zambia.

The year before, one of the company’s buses was involved in a head-on collision with a small passenger car, near Beatrice, about 60km south of the capital, along the Harare-Beitbridge highway.

The accident which claimed the life of journalist Mernat Mafirakurewa.

Wednesday night’s bus accident comes barely a few months after another accident claimed more than 20 lives, that time in Mvuma, when a haulage truck sideswiped a Johannesburg-bound Proliner bus and the two vehicles caught fire.

Harare – A Zimbabwean man has been sentenced to two years in…