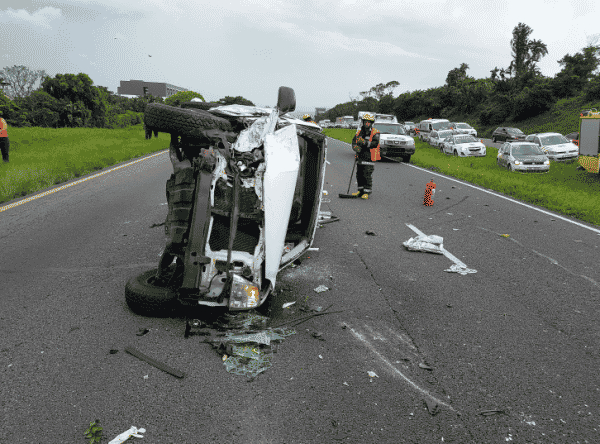 6 injured in N2 head on collision near Galleria

Six people have been injured after three vehicles collided on the N2 South bound near Galleria Mall offramp around 12:30pm on Saturday afternoon.

It is alleged that one vehicle travelling north bound lost control, broke through the centre medium and went on to crash head on with another. A third car rammed into the two crashed cars.

Rescue Care Paramedics arrived on the scene to find that two vehicles had collided head on before one of the vehicles overturned coming to rest on its side, a third vehicle was also damaged in the collision.

Two occupants were entrapped in the vehicle laying on its side. Fire fighters and rescuers worked to free the trapped two who had sustained serious injuries. Both were stabilised by Advanced Life Support Paramedics on the scene before being transported to a nearby hospital for the further care that they required.

A further four people had also been injured and were stabilised on the scene before being transported to various Durban Hospitals for the further care that they required.

AT this stage the exact cause of the collision is unknown however all the necessary authorities were on scene and will be investigating further.