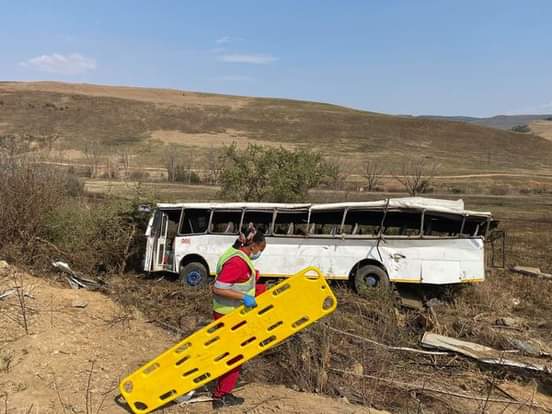 Seventy-four churchgoers were injured when the bus they were travelling in rolled down an embankment in Underberg this morning.

Underberg Emergency Medical Services (UEMS) base manager Kate Bodmann, said paramedics were dispatched to a crash along Coleford Road in the vicinity of Umzimkulu River Lodge at 9.30am this morning.

“A bus carrying churchgoers had lost control on a sharp bend and left the roadway, rolling down an embankment,” she said.

Bodmann (an) advanced life support paramedic and managing director of UEMS, took on the role of on scene commander.

“It was established that 74 patients including 14 children had sustained minor to serious injuries and required medical intervention,” she said.

She said a call was made to other multiple services for assistance and for the transportation of the injured.

Bodmann added that at 11.45am, all 74 patients were accounted for and being transported to nearby hospitals for the further medical care.

“I am so grateful to be part of an occupation where EMS services from as far as Pietermaritzburg arrive on scene to assist. @MagmaEMS Mi7 National Group ER24 EMS (Pty) Ltd. Midlands EMS Netcare911 @EMRS @GijimaEMS. As well as #NDZFire, #NDZTraffic, #RTI and to all the extremely awesome civilians for your assistance on scene today. Thank you all!” she said.