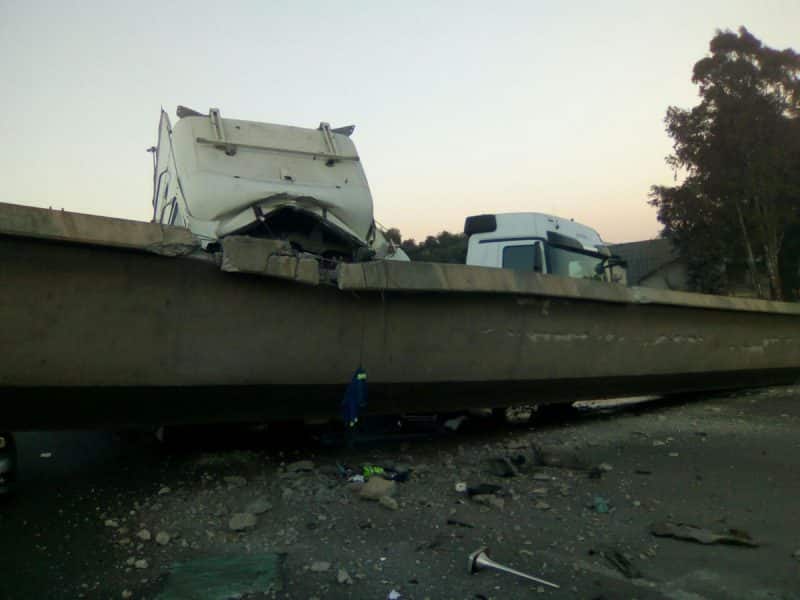 A metre more and we’d be dead: Trucker in N3 bridge collapse ordeal

Robert‚ his wife‚ Maymunat‚ 46‚ and their seven-year-old daughter Lea were driving on the N3 southbound in Germiston when a pedestrian bridge collapsed on three trucks and one car‚ injuring five people.

The bridge between the Geldenhuys and Gillooly’s interchange fell on the truck‚ hitting the engine and the windscreen.

“We were almost gone. If I had passed maybe just a meter further‚ it was on top of us.”

In the dust cloud‚ Robert was confused and asked Maymunat: “Where are we now?”

Robert said the first part of the bridge collapsed on the southbound lane before the second part came down seconds later on the northbound lane. He said even through friends have since shown him photographs of the bridge‚ he is still in disbelief at what happened.

Maymunat was in the passenger seat and Lea was asleep in one of the bunk beds when the bridge collapsed.

People ran to the truck‚ broke the sunroof and pulled Lea out.

Robert managed to free himself by breaking a part of the dashboard in order to open a door. Maymunat was freed by paramedics after they used electric cutters‚ because she was unable to move.

Maymunat is in a critical but stable condition in the Randfontein Private Hospital. She was placed in a medically induced coma after suffering facial and head lacerations‚ fractured ribs‚ injured her left knee and left femoral artery.

Robert has been a truck driver for close to 30 years.

Sanral spokesperson Vusi Mona said on Wednesday they received reports that there was an earth tremor in the area around the time the bridge collapsed.

Macozoma said: “There is a suspicion that there may have been a tremor this side and possibly that might have caused the bridge to be unstable. We don’t know.”