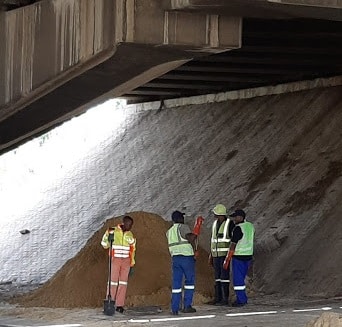 Johannesburg Road Agency (JRA) has announced that the M1 bridge at Booysens off-ramp is safe for motorists to use after initial fears that it was collapsing.

JRA said this after its engineers visited the structure and conducted a full inspection on Thursday morning.

They found: “The stormwater drainage system that is meant to take water from the top of the bridge to the bottom has failed.

“The failure has resulted to water running down the bridge joints and causing erosion to the paving and soil that makes the bridge embankment and abutment.

“JRA can confirm that the bridge structure is sound and safe for use at the moment.

“The JRA through its internal maintenance team is in the process of putting in place holding measures. The continuous monitoring of the situation will be undertaken until full rehabilitation is concluded.”

The inspection followed a warning to motorists issued by the Johannesburg Metro Police Department on Wednesday.

The JRA said the stormwater system “requires urgent rehabilitation, but due to contractors’ festive season holidays, the rehabilitation can only be done January 2020″.

“The JRA would like to assure road users that the safety of roads and bridges remains JRA’s top priority.”