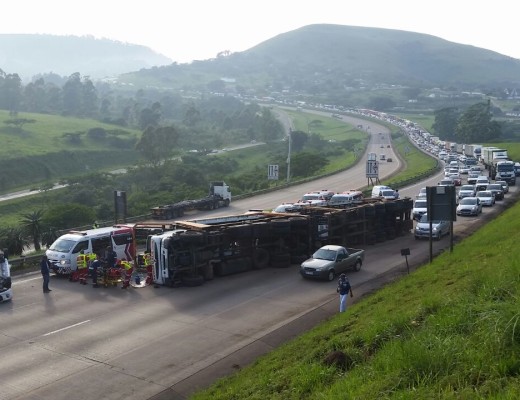 A CAR carrier truck overturned and blocked the freeway on the N3, Pietermaritzburg bound, at the bottom of Key Ridge (Peacevale) earlier this morning.

According to Chris Botha, spokesman for Netcare 911, paramedics responded to an accident and found that a truck carrying cars overturned, scattering its load of vehicles across the highway.

“One of the vehicles flew through the air and landed on another vehicle that was travelling towards Pietermaritzburg. The cause of the crash is unknown at this stage, however the SAPS will be investigating,” said Botha.
He added one man was seriously injured and was treated at the scene before being taken to a nearby hospital.

Traffic was heavily backed up while the scene was being cleared.

Durban – The Road Traffic Management Corporation has welcomed a decision by…

Durban – Driving after dark in Durban has become a matter of…