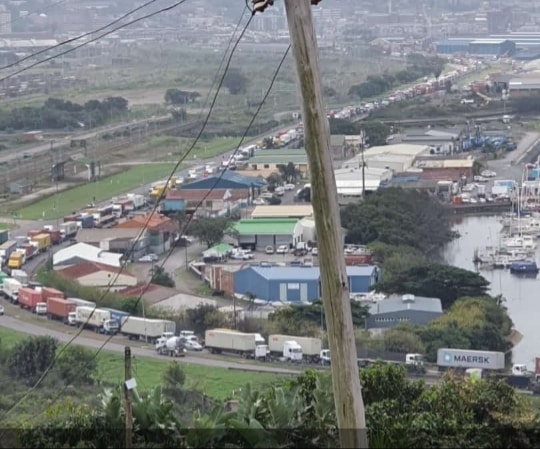 Durban – The movement of trucks on Bayhead Road was severely hampered yesterday after a computer glitch left freight trucks unable to enter or exit the Durban Container Terminal.

While Transnet said the network problem had been fixed, the work backlog would have impacted businesses across the supply chain, freight experts and an economist said yesterday.

This in turn had caused an overflow of bulk traffic on Bayhead Road, in the Durban South area.

She said customers were advised to hold back on dispatching trucks.

“The system that connects all our computer-based functions was affected. But this has now been resolved.

“Operations have resumed and we are prioritising the backlog and constantly monitoring the situation,” she said.

A source, who asked not to be named, claimed that the network had experienced issues since Monday.

“The system allows trucks into the area to either load or off load cargo. This is a very serious situation, not just for traffic but this is a very busy period as shops are stocking up for the Christmas rush,” the source said.

He said each container brought in was assigned a place at the terminal.

“Each load must be entered into the system, so there needs to be a recording that takes place, and this is affected when there is a computer glitch. Thou- sands of containers are dropped off and picked up at the terminal and one day’s loss of work is catastrophic,” he said.

Hutson said a system breakdown also affected the drivers who travelled from other countries such as Zambia and the Democratic Republic of Congo.

He said they worked on a tight schedule and couldn’t allow for stoppages.

The chief executive of the Road Freight Association, Gavin Kelly, said road freight logistics were based on the principles of the efficient movement of cargo and the optimal use of resources.

“Any delays in loading or offloading and the interruption of scheduled transportation time would have an impact on business in terms of the sustainability of operations due to vehicles standing and not being able to meet delivery deadlines and transporters not being able to earn revenue on their vehicles,” he said.

Kelly said the industry had very lean profit margins, and the harbour backlog added to all the other challenges faced by the industry.

“The industry cannot take this any more,” he said.

Economist Dawie Roodt said Transnet needed to work with more than just one computer system so that in the event of one suffering issues, there were back-ups that could be used.

He said often many of the items transported had a timeline that was crucial.

“A truck waiting with a load for a long time could lead to the stock going bad and this will cost the company a massive loss in revenue,” he said.

Roodt said that while he did not think the system glitch would weaken investor confidence, it would certainly hurt the economy if the issue was not resolved.

“The roads have become unusually congested during peak hours, causing huge frustration for motorists. We hope that Transnet can speedily resolve their network issues.

“We thank the metro police for their assistance and we must ask residents to be patient while the issues are resolved,” she said.

Positive Freight Solutions Forum advocate Pria Hassan refused to comment on the matter, except to say that the organisation had been informed of the issue by Transnet. SA Trucker