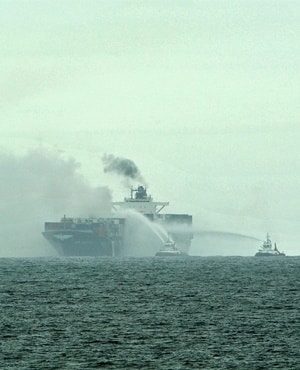 Port Elizabeth – Efforts are underway to extinguish a fire in the hold of a Liberian-flagged container ship carrying hazardous cargo, which is currently docked at the Port of Ngqura.

Ngqura’s port manager Mpumi Dweba said the APL Austria reported a fire on board around 18:00 on Sunday, while it was off Cape St Francis.

The fire was in the fourth cargo hold, Captain Darron Burgess of the SA Maritime Safety Authority’s (Samsa) Southern Region said. The vessel was instructed to proceed to Algoa Bay anchorage and arrived around 02:00 on Monday.

“There are several containers containing hazardous cargo on deck above the number four cargo hold, but fortunately none of them are on fire,” he said.

Principal officer and harbour master of the Port of Ngqura, captains Ian Renders and Thulani Dubeko, boarded the vessel shortly after 04:00 to assess the situation and give advice. Two fire officers boarded the vessel later and three harbour tugs helped the firefighting operation by providing boundary cooling.

Burgess said the ship heaved anchor around 05:00 and was instructed to proceed further out in the bay to get clear of the other vessels in the anchorage area.

“When the fire was brought relatively under control, arrangements were made to take the vessel into the Port of Ngqura. The vessel entered Ngqura around 10:00 this morning,” he said.

National Sea Rescue Institute spokesperson, Craig Lambinon, said four non-essential crew members were evacuated off the ship in the early hours of the morning. Paramedics treated one of the men for a leg injury.

Burgess said an investigation would be conducted to determine the cause of the fire once it was extinguished.