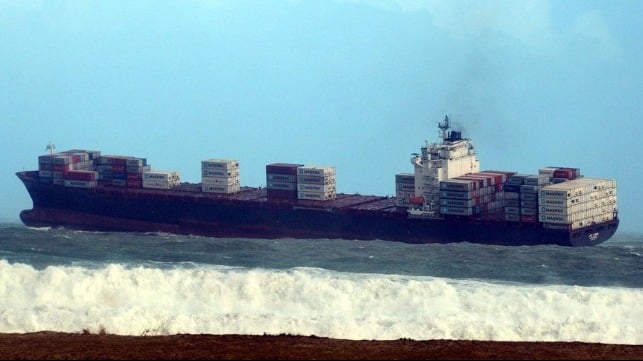 Global shipping operator Maersk confirmed that the JPO Libra was “currently stuck at anchor” relatively close inshore, in the vicinity of Sunset Beach.

However, according to Maersk spokesperson Kerry Rosser, the vessel was not in danger and not dragging anchor.

“The anchor can come up, but it has another anchor chain stuck around it,” she said.

“We are looking at getting a tug or launch boat to help. Right now the vessel has told us they are happy to hold their position.”

She said Maersk was in constant communication with the vessel and had contingency plans in place should the situation worsen.

A Transnet spokesperson said earlier that about 10 vessels had been instructed to up-anchor and move to a safer position closer to Robben Island due to the adverse weather conditions.

A ship at sunset beach in Milnerton #CapeTown trying to get to the shore.

Images and videos of the vessel circulated on social media on Monday, with some fearing it was in imminent danger. A video taken from the beach showed the vessel listing and running her engine to keep her head into the massive swell.

Cape Town was battered by gale-force winds and heavy seas when a strong cold front made landfall early on Monday.