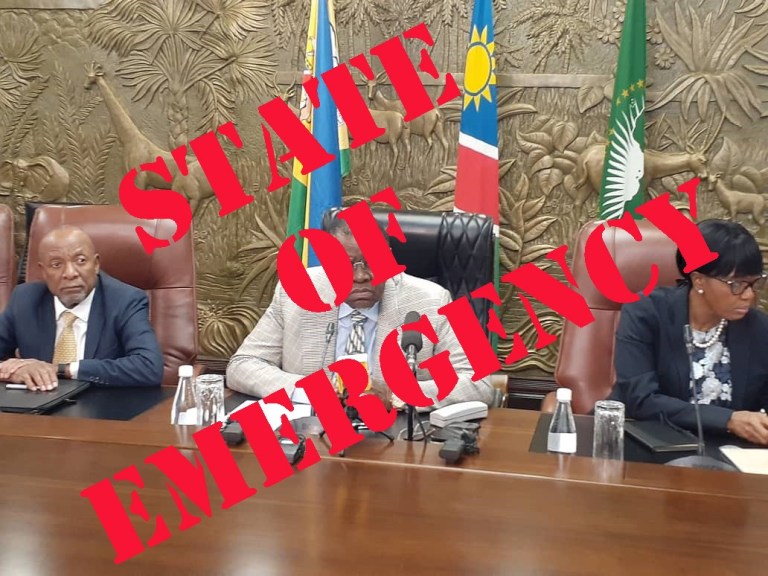 Namibian President, Hage Geingob has declared a state of Emergency in the country amid the coronavirus pandemic.

Geingob announced this at the State House while explaining that the country will go into almost complete lockdown for the next 30 days.

Some of the measures include the suspension of the issuance of visas on arrival at the Hosea Kutako International Airport (HKIA) and the implementation of a travel ban on foreign nationals, by air and sea, from affected countries such as the Schengen States, China, Iran, Korea, United Kingdom, USA and Japan.

The general public for a period of 30 days following the adoption of the State of Emergency will also be prohibited from having public gatherings of more than 50 people.

“The health of Namibians is the first priority. COVID-19 is public health emergency, considering the threat posed to the lives of the Namibian People. By virtue of the Power vested in me by Article 26(1) of the Constitution, I declare a State Of Emergency, with immediate effect,” Geingob stated.

In his address on the measures that the State of Emergency will entail, the minister of health, Dr Kalumbi Shangula stated that a temporary travel suspension for 30 days for Namibians or Permanent residents will be instituted.

Dr Shangula further stated that exceptional cases of travel will only be allowed on persons seeking medical treatment, essential services like humanitarian assistance, truck drivers bringing food and other essential commodities, and Namibians returning home, among others.

The health minister added that all leisure, business and social travels, have also been suspended, and Namibians who are residents in other countries considering to visit Namibia are advised to postpone such visits.

In addition, flights, including private chartered flights to and from countries where there is active local transmission of the coronavirus, have also been suspended for 30 days.

“All returning Namibians and permanent residents arriving from countries at high risk will be subject to supervised quarantine from 14 days (self quarantine). South African borders, including air travel, will remain open to serve as points of entry for Namibians returning home and exit points for visitors from Namibia, and to facilitate trade between the two countries,” Dr Shangula said.

The minister stated that the State of Emergency will also come with the deployment of uniformed forces such as soldiers from the Ministry of Defence Force, Nampol and Correctional Services and health professionals onto the streets.

“We declared a state of emergency because of the coronavirus outbreak. If you infringe on people’s freedom of movement, they will take you to court. This will allow us to restrict human rights such as movement in a legal manner,” Geingob explained.

It was stated that important events such as the swearing in of ministers and the presentation of the national budget will go on as they are essential events which provide for the functioning of essential sectors within the state.

The minister of finance, Calle Schlettwein, also stated that a total N$124 million will be availed to fight the outbreak of COVID-19 in the country.