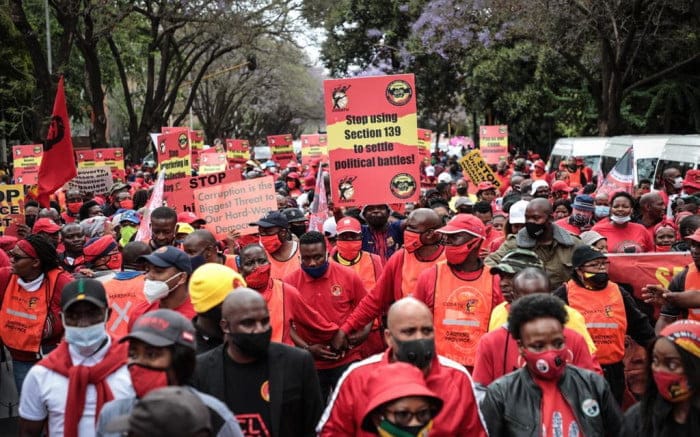 The Congress of South African Trade Unions (Cosatu) is embarking on a one-day nationwide strike today, October 7 to “push” the government and private sector to “fix the economic mess” the country finds itself in.

Cosatu called on its members to take part in the one-day strike on Thursday.

“The federation is issuing a call to all workers and South Africans to join the strike on Thursday. They can either join the planned activities across the country or withdraw their labour by staying at home on the day,” said Cosatu spokesperson Sizwe Pamla.

He said the union was demanding urgent action from policymakers in the government and the private sector to stop “the attacks” directed at workers.

“Both the public and the private sector have been blatantly undermining collective bargaining.

“We want the reversal of budget cuts that have led to an unacceptable wage freeze in the public service, the disintegration of the CCMA, and retrenchments in state-owned companies,” Pamla said.

The union would call on the private sector to abandon its “investment strike” that had seen many companies either hoarding or exporting cash, despite receiving “generous” incentives to invest back into the economy.

“This year billions were given away in tax cuts when that money could have been used to increase government spending.

“Instead of clearly indicating that the rich must bear the burden of fixing the government’s balance sheet after decades of rising profits — in a country that is the most unequal in the world and whose inequality is grossly racialised — the government is going back to attacking the public service, when there is a need to build the capacity of the state to accelerate delivery,” Pamla said.

According to the union, the biggest hurdle in fixing SA’s problems is the inefficiency of the government and the scourge of corruption in the public and private sector.

“It is disgraceful that with no reduction in unemployment and with economic activity deteriorating year after year, neoliberal die-hards in government continue to push the government to persist in its rigid targets of a budget deficit, public debt and inflation rate — in a misguided hope that the applauding private sector would step in.

“All this pulling back on spending by government at a time when there is a downturn in the economy exposes the fallacy of the Treasury’s claim that it is pursuing a countercyclical fiscal policy, by which it means that when growth is strong government reduces spending or saves so that it can spend aggressively when the economy is declining,” Pamla said.

Durban – It has been a very busy day for the task…