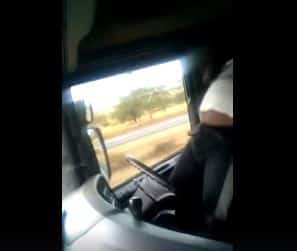 Video – Dancing truck driver gets in trouble with RTMC

RTMC has shared a video of a dancing truck driver calling for the public to help identify him so he can face reckless driving charges. The video went viral
Total
32
Shares
Share 32
Tweet 0
Pin it 0

The Road Transport Motor Corporation (RTMC) has asked the public to help identify a truck driver who was filmed dancing while driving.

“He must account for this irresponsible conduct,” says RTMC.

RTMC shared a 30-second video of the truck driver showing him dancing to music as he was driving.

To ‘properly execute’ his moves, at one time he stands up leaning to the seat to allow space to lift his legs.

Drivers are supposed to concentrate on driving at all times considering that many accidents are caused by abstracted drivers.

@Menzongenzie responded to RTMC’s tweet asking where the misconduct was of which they replied
“Reckless and negligent driving. Also inconsiderate driving. Section 63 and 64 of the Road Traffic Act.”

The call by RTMC has however been met with mixed reactions from the public as some think there was nothing bad by enjoying yourself while driving if responses on the tweet are anything to go by.

The dancing truck driver video went viral on social media in November. On truck driver platforms the man’s actions were condemned but many drivers confessed to having done it before.

“I’ll like to take this moment and extend my sincere condolences to his family in advance may his soul rest in eternal peace,” read one comment.

Others generally confessed that they do it, have done it or they know that truck drivers do it.

Another comment read, “I know that story of dancing, its when.u tired but got a deadline to offload then u go crazy like that lol.”

You can speed up your life if you want to that’s easy.…