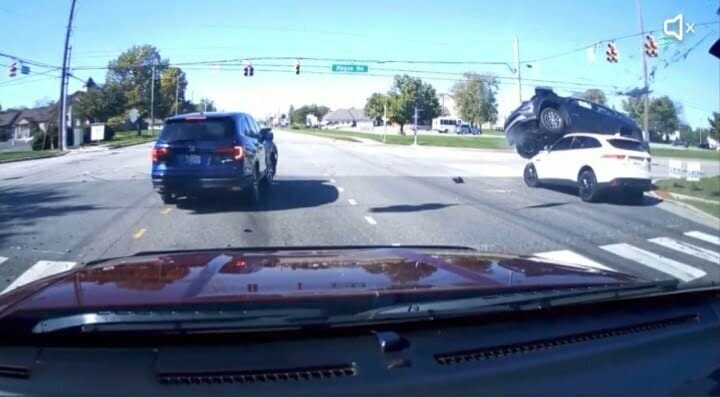 A video has surfaced online of a three-vehicle crash captured from a dashcam from another car. So weird, without the video footage, it would be unexplainable.

In the 26-second video, the vehicle from which the video is being captured is stopping at a traffic light controlled intersection.

An SUV approaches at full speed from the opposite direction, and as it enters the intersection, another SUV also enters from the left-hand side.

The SUV approaching from the crashes into the other SUV which rolls several times passing in front of the filming car.

The SUV disappears from the camera’s view on the right-hand side of the vehicle.

Read also: ISS Hits Back At NBCRFLI Over Allegations That It’s Operating Illegally

After about 4 – 5 seconds it appears, now on top of another vehicle where it landed as it rolled.

SA Trucker could not immediately ascertain when and where this accident happened.

Dashcam Captures Car Land On Top Of Another In 3-Vehicle Accidenthttps://t.co/ie8aZYmLJ7 pic.twitter.com/B5pf10GUh7

Watch the moment a taxi collides with a bus near Empangeni, killing…

Travelling between Hanover and Richmond on N1 in Northern Cape, has been…