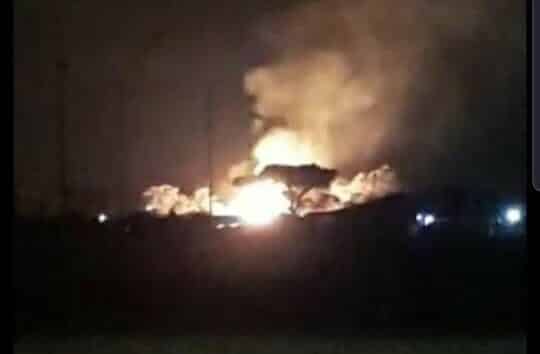 On the eve of the November 1 Municipal elections around 23h09, a huge ball of fire lit up Somerset West with social media reports attributing it to an explosion at state arms manufacturer, Rheinmetall Denel Munition (RDM).

Videos posted on social media show a massive blast a distance away allegedly from the Denel.

In one of the videos, captured from CCTV the sky lits up for a few seconds before the night darkness takes back over.

Rhoda-Ann Bazier, PR Councillor for Macassar confirmed the incident and said there were no fatalities.

When we got to the gate, there were a lot of people standing there, some area neighbourhood watches, the police, emergency services and so forth. There was an explosion inside but there were no fatalities.

An explosion at Denel in September 2018 killed eight factory workers.

The families of the eight have since approached the Department of Employment and Labour to have the company’s explosives licence suspended.

“We demand from the Department of Employment and Labour to suspend the Explosive Licenses issued to Denel Rheinmetall Denel Munition (PTY) LTD for Somerset West and Review all Explosive Licenses issued to Rheinmetall Denel Munition (PTY) LTD by civil engineers with extensive experience designing and inspecting buildings for explosive manufacturing, mixing and/or blending (sic),” the letter stated.

The families are demanding that the site’s licence be reviewed, and the suspension of explosives licences issued to RDM.

The letter said the distance of the blenders on site were not adequate to stop an explosion from damaging concrete walls.

“The concrete walls are also too thin to shield employees from fragments should an explosion occur again,” the letter stated.

Sam & Nicholas Attorneys, representing the families, said that should the department fail to suspend the licences, it will be reported to the SA Human Rights Commission.

The firm said it will also ask the Office of the Public Protector to investigate alleged maladministration and misconduct in the awarding of explosives licenses to RDM.

On Friday, members of trade union Cosatu protested outside the factory, joining the call for the suspension of explosives licences.

“We are of the view that the explosion occurred due to non-compliance with safety regulations and negligence on the part of RDM. We are demanding that the Department of Employment and Labour suspend the explosive licences of the company with immediate effect. We furthermore call for the immediate review of all explosive licences issued to RDM,” Cosatu’s Western Cape secretary Malvern de Bruyn said.

With reports of the latest blast last night, it remains to be seen how it will affect the direction of the case.

Denel has been battling with financial issues and allegations of corruption that have taken centre stage at the State Capture Inquiry. It has also struggled to pay staff salaries due to its financial woes.

Late last night, there were reports of a blast at the Rheinmetall Denel Munition plant.

For the details now, Refilwe speaks to PR Councilor for the greater Macassar area Rhoda-Ann Bazier

Reports of a “massive” explosion this evening at the Rheinmetall Denel Munition facility at Somerset West. pic.twitter.com/yFlIhIIg5p

The Durban City Life building is up in smoke after allegedly being…
Two police vehicles and an ambulance have been burnt in Boikhutso, Lichtenburg…