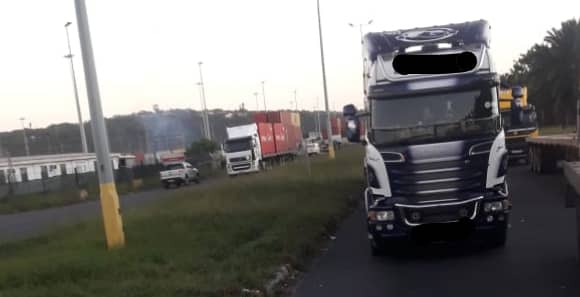 Durban – A local driver was taken in for questioning from DCT Pier 2, Durban after he allegedly threatened to burn a foreign driver accusing him of using fake documents and stealing jobs meant for locals.

It has been reported that the suspect together with three other guys approached another driver who is not South African and accused him of using a fake licence.

According to a witness who refused to be named, the issue quickly reached a boiling point where the suspect went to his truck and took a two litre container with petrol and threatened to burn the foreign driver and his truck.

He was apparently restrained by the other three guys in his company.

When all this was happening an unknown person called the Transnet who did not waste time and dispatched security personnel.

Security details caught up with the guy and recovered a two litre plastic bottle with petrol and he was taken in for questioning.

SA Trucker spoke to the supervisor on duty who confirmed the incident and said SAPS Maydon Warf was called to attend.

Upon initial investigations the SAPS officers said they could not open a case since they were acting on an anonymous tip off and no complainant came, he added.

Apparently another person who witnessed the incident tipped off Transnet officials who followed up and apprehended the man.

According to the supervisor, when the man was questioned he said the petrol was for cleaning his hands in case he gets his hands messed up after a breakdown.

Maydon Warf SAPS OB 443/2019 details the incident and notes that there was no complainant in the matter.