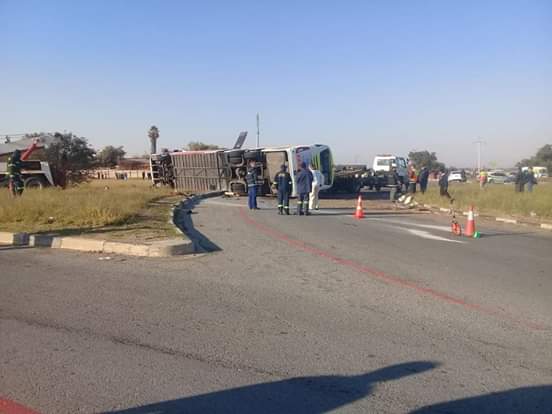 This Accident in Alma Road circle in welkom this morning 😥😥#InterCape Bus pic.twitter.com/efQqQ8ORoR

The emergency services found two bodies (a child and an adult) outside of the bus and five adults and a child lying under the bus.

It is reported that 46 people were treated for their injuries.

Seven patients were transported to hospitals in the area, all of them in critical condition.

One of these patients has subsequently died, paramedics reported.

7 people including two children have died after an Intercape bus driver lost control in Welkom, Free State in the early hours of the morning. The 8th body of a driver was found hanging on a tree about 300 metres from the scene. #sabcnews#sabcfs pic.twitter.com/vaL31GvaYT

The driver of the bus was found hanging from a nearby tree. It is reported that he hung himself.

According to emergency services a total of eight people including the driver died.

Seven patients have been transported to nearby hospitals in a critical condition.

A popular Zim socialite and businessman, Genius ‘Ginimbi Kadungure’ died in a…