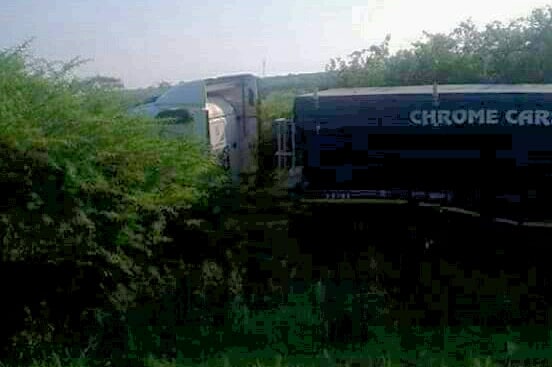 First people to respond to a crash scene on N2 near Mkhuze were terrified to touch the ‘lifeless body’ of a trucker who had just crashed some moments earlier. He laid motionless on the steering prompting them to call the authorities to attend to him.

The truck engine was still running while it stood trapped in the forest. The truck had left the road and crashed several trees before it came to rest in the middle of the bush.

When the SAPS officers finally arrived, about 15minutes later, they checked on the driver and found that he was actually alive but in deep sleeping mode.

A few moments later paramedics from the KZN EMS arrived and discovered there were three empty energy drink cans in his truck.

Efforts to wake him up at that stage proved fruitless and the man had to be put on a drip to reduce the effect of the energy drinks before being transported to hospital.

He was lucky to survive without any injuries.

The man, who has refused to be named, spoke to our correspondent and told him that he spent the night in hospital and only regained consciouness the following day.

“I was tired and feeling sleepy and as I always do I bought energy drinks to curb it, only this time it was 3 cans when I usually take just one,” he said.

Asked why he took three he said, “I wanted it to work fast and maybe give me a few more hours to get to my destination in Richards Bay, but I have learnt the hard way now. I will never do it,” he added.

KZN EMS spokesman Robert Mackenzie warned truck drivers to give themselves enough time to rest or risk losing their lives.

Did you know that energy drinks consumed in excess will harm you?

“Two years ago our paramedics attended to a truck driver who had a similar problem, luckily for him, he managed to pull off the road and alerted his wife who called the ambulance,” he said.

“When his wife called the paramedics she said the man was behaving as if he had feats and was struggling to talk,”

When the crew finally reached him on N3 near Estcourt weighbridge, they found him unconscious and administered CPR. He responded well and after a six hour sleep he able to carry on with his journey.

Is it really worth it, fellow truckers?