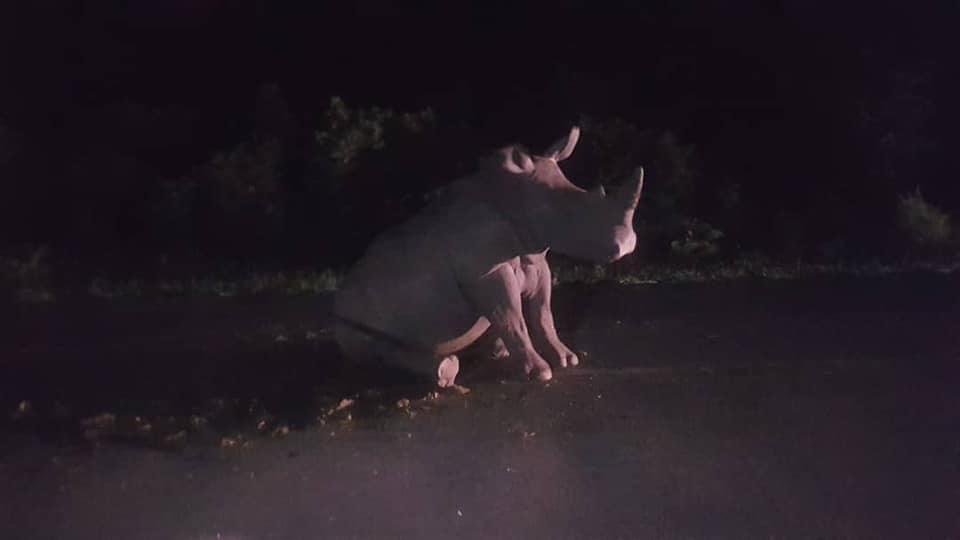 A truck driver has been locked up in Zambia after his truck hit and killed two rhinos in Mosi-oa-Tunya national park, in Livingstone, Zambia, the country’s Tourism and Arts Ministry has reported.

37-year-old Ashes Gumbo was arrested after two rhinos, a male and female died following the accident on 26 February 2020.

According to Sakabilo Kalembwe, Tourism and Arts ministry spokesperson, Gumbo was overspeeding on Livingstone-Kazungula road when the accident happened.

“The driver totally disregarded road signage and speed limits judging from the damage caused on the rhinos,” said Kalembwe.

Victoria Falls Wildlife Trust from Zimbabwe and park management staff tried in vain to save the iconic animals.

Both animals, a mother, and its calf suffered severe injuries and nothing could be done to save them.

He added that the Department of National Parks and Wildlife and the Road Development Agency are working on a plan to install speed bumps on known animal crossing points.

It was not immediately clear what charges the truck driver would face. He was driving a Namibian registered truck.

This website uses cookies to improve your experience while you navigate through the website. Out of these, the cookies that are categorized as necessary are stored on your browser as they are essential for the working of basic functionalities of the website. We also use third-party cookies that help us analyze and understand how you use this website. These cookies will be stored in your browser only with your consent. You also have the option to opt-out of these cookies. But opting out of some of these cookies may affect your browsing experience.
Necessary Always Enabled
Necessary cookies are absolutely essential for the website to function properly. These cookies ensure basic functionalities and security features of the website, anonymously.
Functional
Functional cookies help to perform certain functionalities like sharing the content of the website on social media platforms, collect feedbacks, and other third-party features.
Performance
Performance cookies are used to understand and analyze the key performance indexes of the website which helps in delivering a better user experience for the visitors.
Analytics
Analytical cookies are used to understand how visitors interact with the website. These cookies help provide information on metrics the number of visitors, bounce rate, traffic source, etc.
Advertisement
Advertisement cookies are used to provide visitors with relevant ads and marketing campaigns. These cookies track visitors across websites and collect information to provide customized ads.
Others
Other uncategorized cookies are those that are being analyzed and have not been classified into a category as yet.
SAVE & ACCEPT
Total
194
Share
194
0
0
0
0