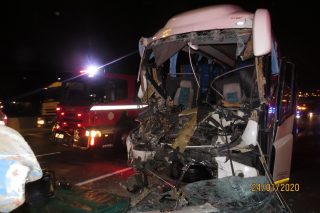 Driver killed as bus crashes into back of truck on N3, Germiston

Johannesburg – A bus driver died after allegedly crashing his bus into a stationary truck on the N3 freeway near Germiston on Friday night.

“The accident happened around 21h30 when the driver was on his way to pick up passengers in Germiston,” said Ntladi.

“Paramedics declared him dead at the scene. He sustained multiple injuries during the accident with a truck carrying a large container.”

The bus driver apparently did not notice that the truck was stationary and got into the back of the truck. He was killed on impact.

“Rescue teams had to use mechanical equipment to free the man’s body, which was trapped behind the wheel of the bus, from the wreckage”

“The truck driver did not suffer any injuries.”