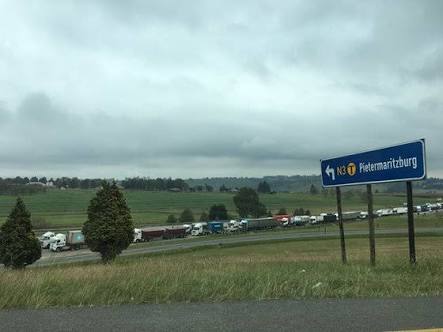 “It was by grace that I made it, anything could have happened”

Those are the words of a truck driver who survived a life and death situation on Friday morning when his freightliner truck lost brakes while coming down Town hill in Pietermaritzburg.

“When I stopped on the second stop sign down Town hill my truck was ok and brakes felt effective as always,” said Shingi, the truck driver who has chosen to be identified by his first name only.

“I engaged my low gears and came down slowly, but as with the freightliner, you have to use the foot brake to reduce speed. I pressed the brakes slightly to enable me to negotiate the curve just by the first bridge but the truck had no brakes”

“I could hear pressure leaking from underneath the truck everytime I pressed brakes. At this stage the truck was very quickly gaining speed as the 33 ton load pushed it,”

“By grace, the road was not very busy as it was around 11h20 so I left the slow lane and occupied the two fast lanes. Hazards and head lights flashing I came down the hill eyes firmly on the road and asked every angel I know to intercede in prayer for me.”

Shingi said he fought to control the run away truck negotiating curves at high speed and small cars paved way for him as he rolled down the hill.

“I held my breath all the time until I felt the truck reducing speed as I negotiated the curve just after Liberty Mall and only then I realised it could end well after all.”

When he finally managed to stop the truck the mechanic came and checked it. He found out that one pressure pipe joiner had given up and the pressure was leaking from there.

He has urged all truck drivers to make sure they inspect their trucks and report all the defects. Further saying that the problem on his truck had built up gradually from a very small oil leak that later softened the joiner until it gave up to zero brakes on a slope.

For sure anything could have happened especially if the road was busy or if he had panicked.

The saddest thing is that sometimes the driver does not live to tell the story like Shingi has done.