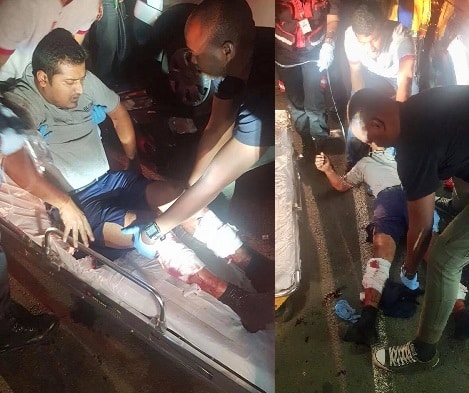 Driver stabbed multiple times and robbed by a ‘robot beggar’

A Durban motorist is lucky to be alive after he encountering a horrific stabbing ordeal at the hands of a robber disguised as a robot beggar. He has shared his ordeal to warn other motorists to never lose guard especially at intersections.

“I thought he was a sincere beggar but he had violence on his mind,” he said.

Himal Singh, a father of one, related the details of the brazen and bloody attack on him unleashed by a crazed robber posing as a beggar at the notorious intersection. Singh sustained seven stab wounds on both legs and was fortunately attended to by an unknown off-duty paramedic whose quick intervention probably saved his life on that fateful night.

“I approached the red robot, window half open to the usual sight of a beggar at the four-way stop. Hands together, he approached me with a ‘R2 please’ request to which I replied sorry no change. He walked away as if to approach the next car as I waited for the traffic light to change. A split second later, right at my window, the so called beggar demands for my cell-phone. Thinking he was a regular pickpocketer, I refused, not knowing he had a knife right next to my face saying that he would poke me. What followed is a series of events that I would never have anticipated that could occur,” said Singh.

“My instinct was to immediately move left and away from the knife to avoid being stabbed in the neck or face. I slid my body on to the passenger seat and kicked the suspect through my driver side window with my safety boots on. With the adrenaline and shock, I didn’t realise at the time that I was being stabbed but just thought the knife on my legs were mild pokes. For the first time my gun was tucked away under the driver’s seat, and I couldn’t access it as I tried. Also if I came forward, I knew I ran the risk of being stabbed in the face, neck or upper body. The suspect lunged to pull out the key from the ignition giving me a second or two to exit the vehicle through the passenger door.

As I walked towards the suspect, he approached me and I managed to land a punch or two on him. We headed to the rear of the vehicle where a motorist enquired what had happened. At this point the suspect quickly shouted out that I had stolen his money. The suspect then kicked me and knocked me to the ground. I shouted for help. He grabbed my cell phone which fell out of my pocket and fled the scene. I attempted to wake up and give chase but it was only then that I realised how badly I had been stabbed as my pants were blood-soaked and my legs were extremely weak,” a brave Singh said. Reaction Unit South Africa (RUSA) were alerted to the stabbing and robbery by motorists and responded to the scene.

RUSA head, Prem Balram said, “Reaction Officers found a male who suffered stab wounds to both his legs. The victim exited the vehicle through the passenger door and was chased and attacked in full view of other motorists. He was robbed of his Huawei P8 Lite cellphone. RUSA paramedics treated the man and transported him to a hospital in Phoenix.

RUSA has attended to several robberies and attacks on motorists in the vicinity of these robots in recent weeks. Drivers stopping at these traffic lights are warned to be on high alert. Windows should be reeled up and doors locked. Stay alert at all times.”

Phoenix CPF chairman, Umesh Singh said, “There have been one too many attacks at that hot spot. Community members have been warned to stay on high alert. These types of armed robberies are not uncommon in the Phoenix area but the violence meted out is shocking. It is fortunate that the motorist is on the road to recovery. Drivers and passengers need to be vigilant and do not respond to anyone outside of your vehicle.”

The recovering victim said, “I want to thank everyone who assisted me on scene and all friends and family for their support and concern. I urge other motorists to be on high alert. You could be a victim or watch a robbery unfolding before you. Please assist by hooting or calling for help. I have travelled this way for the past 18 years. I usually have my window up and my firearm nearby. This time I dropped my guard and it almost cost me my life.”