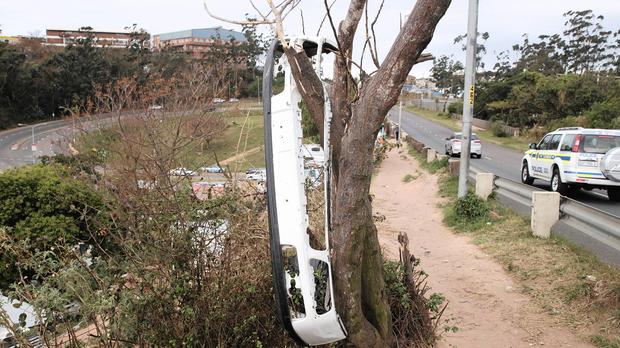 Durban – Driving after dark in Durban has become a matter of life and death, as night stalkers lay traps in the road to cause drivers to crash.

On the South Coast, motorists travelling late at night have been warned against criminals allegedly following them in the hopes of stealing their cars.

In eThekwini metro a nightmare pattern has emerged at the Croftdene off-ramp, the main road into Chatsworth CBD, where victims have crashed down the embankments after hitting objects deliberately placed in the road. These include boulders, light poles and trash bags.

In the latest incident, criminals have run into the road to cause an accident.

Shane Madaray, 28, came out of hospital this week after a horrifying ordeal two weeks ago, when he crashed over the embankment at the off-ramp.

“My friend, Marlin, and I decided to go fishing, so we headed out in the early hours of the morning and there was very little traffic on the road.”

“There’s no lighting in that area and as we came down the road, I hit a pole which was lying across the road. It was not something you expect. I hit the barrier and I felt the car flipping, but I couldn’t see anything. As soon as the car stopped, I felt hands going into my pockets and they took my phone and cash.”

“There was a guy trying to take my shoes off, so he pulled me out of the car and took my shoes and belt.”

“I remember the police arriving. I gave them my brother’s number and passed out. The next thing I remember is waking up in hospital,” said Shane.

His older brother, Shiltom, was called to the scene and was shocked at what followed. Part of his brother’s car hung in a tree at the top of the embankment.

“I saw all the emergency vehicles when I got there. Shane had already been taken to hospital. I saw the car had flown over the shacks and landed at the bottom.

“The people gathering there didn’t want us to take the car, saying it belonged to them.”

“It was too steep for a tow truck to get the vehicle out and so we had to call a crane. At that stage, I could only think about Shane, I was so shocked. By the time the crane got there, the car had been stripped, there was just a shell left,” said Shiltom.

Shane suffered head injuries, swelling on the brain, a broken shoulder and arm, a cracked spine, and his ribs punctured his lungs. His friend, Marlin Pillay, who had been dragged 100m from the crashed vehicle, remains in a coma in hospital. INDEPENDENT ON SATURDAY