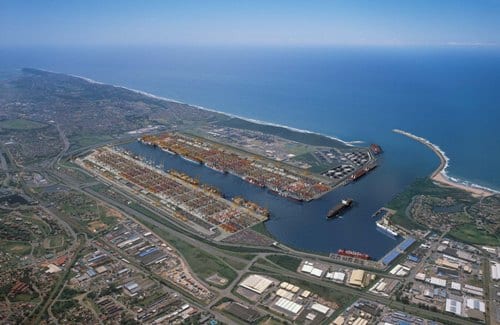 In KZN, the Durban Container Terminal’s (DCT) road at Pier 2 is the main arterial supply for the North, South and East quays and other departments in DCT which handle approximately 3 000 laden trucks and other vehicles in the terminal daily.

The road has been in existence for more than 35 years and several repairs have been completed due to the constant ‘heavy’ traffic. Over the years bad weather has also exacerbated the decline of the condition of the road to the extent that it can no longer be maintained normally.

“The poor condition of the road is not only a poor reflection on TPT’s position as a leader in our industry but it has also impacted on the general wear and tear of equipment thereby also increasing maintenance expenses at DCT.

“In November 2015 we began to address this issue by rolling out Phase 1 of our two part project to provide the terminal users with a suitably superior and safely constructed road. I am delighted to report that despite recent underground service risks which we had identified as being problematic that we are at 47% completion of the overall Road Rehabilitation Project with minimal impact to operations and truck turnaround times,” stated Transnet Port Terminals’ GM: KZN Operations Containers, Brenda Magqwaka.

Phase 1 of the Road Rehabilitation Project entailed the reconstruction of the current in bound lanes with traffic being diverted onto the current out bound lanes. Out bound traffic has in the interim been diverted onto the temporary out bound lanes created during the preparatory phase. Challenges faced during this stage included identifying and securing the underground services, which was acknowledged as a potential risk ahead of the project commencing.

However, the issues were resolved efficiently with additional sleeves being added for extra services in the event the need arises in the future. The completion date for Phase 1 is set for Quarter 3 of this year with the overall project completion date predicted for Quarter 2 in 2017.

“We understand the importance of investing in our infrastructure to create greater value for our customers by ultimately delivering better service and turnaround times. Our Key Accounts Managers are in constant communication with our clients and stakeholders to update them on the progress being made. We are grateful for their patience and support with the completion of this much-needed road rehabilitation project,” concluded Magqwaka.

Truck jackknife meaning What causes jackknifing? How to avoid jackknife accidents How…