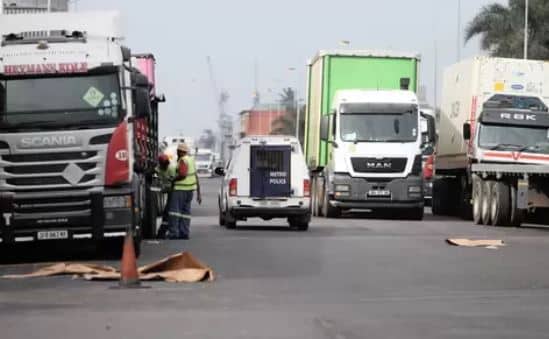 Durban – A petition is making the rounds on the web, demanding the removal of trucks from residential roads.

Councillor JP Prinsloo from the Bluff said residents had, for years, been subjected to a steady influx of trucks entering residential areas illegally to access the harbour and avoid long queues and congestion along dedicated access routes.

Prinsloo said the harbour was unable to handle the amount of import- and export-related activity.

“This situation is largely due to government’s failure to plan and invest in the expansion of the harbour and its supporting infrastructure designed to deal with the high volumes of traffic,” he said.

He said the metro police office assigned to deal with trucks in Clairwood was under-resourced, and added that the city did not have the capacity to handle heavy vehicles because there was no contract in place to tow vehicles which broke the law and put citizens’ lives at risk.

Metro police spokesperson Parboo Sewpersad confirmed there was no tow truck contract in place for the city, but said during emergency situations there was a process they followed.

“There is ongoing enforcement that is being conducted in residential areas by the metro police department,” he said.

Clairwood ward councillor Sharmaine Sewshanker said unregulated trucking activity in Clairwood was a nightmare for residents and the roads had been completely damaged.

“Normal road users’ and pedestrians’ lives are at risk here. We’ve had accidents, children knocked over and we’ve had deaths,” said Sewshanker.

Councillor Gavin Hegter, also from the Bluff, reiterated that residential roads were not meant for trucks and they caused accidents and deaths.

He said they had put forth various proposals to eThekwini Municipality including signage on the roads.