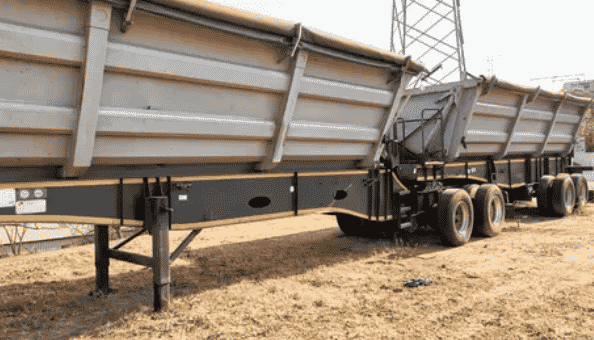 Sold as a second-hand Roadhog trailer in excellent condition, Truck World failed to tell the customer this was a rebuilt, accident-damaged trailer that was a Roadhog at the back and something completely different in the front. Picture: Supplied

Durban – Up the creek, without a paddle. That’s how Donovan Munsamy felt when his bank told him to “just keep paying” for a side-tipping trailer that had been fraudulently misrepresented and sold to him as roadworthy and second-hand – not accident-damaged and rebuilt.

Now he’s saddled with monthly repayments of almost R15 000 for a trailer that is structurally unfit for purpose, it has no roadworthy certificate and it’s been impounded by the police. And yet Standard Bank has told the Durban businessman he must honour his contractual obligations to it.

Munsamy’s logistics company runs horse and trailers across the border. In August last year, he bought a 2012 Roadhog side-tipping trailer from a dealer in Johannesburg called Truck World.

The trailer is composed of two sections, front and back. From the start, there were problems: Every time he used it, it had a breakdown – tyres would burst and the hydraulic suspension would pop.

In December, when it had a major breakdown, he contacted the dealership, which washed its hands.

Arie Visagie, Truck World’s sales manager, told him: “Trailer was supplied with a roadworthy certificate and delivered fully serviced and ready to work. If you study the invoice attached you will notice underlined items witch (sic) are all suspension parts that were replaced.

“We cannot be held responsible for a trailer that has left our yard more than three months ago. As a dealer we can certainly not be expected to carry the transporter’s risk of doing transport on the most notorious roads in the country.”

Wrong, wrong, wrong: The Consumer Protection Act (CPA) gives consumers an automatic six-month warranty of quality on all goods, so blaming the country’s bad roads or bad luck simply doesn’t fly. Munsamy was never provided with a roadworthy certificate. But what transpired later was even more egregious.

Visagie ended his mail by telling the complainant: “We are sorry to hear about your misfortunes and wish you all the best in speedy repairs. Please remember to do daily maintenance on the unit and major checks at least once a week as these trailers work very hard and the road conditions affect them daily.”

With that door slammed in his face, Munsamy approached his financier and told them about the trailer’s issues.

“Standard Bank then advised me to please take that trailer to the manufacturer Roadhog themselves for a full report which I certainly did.

“So in a nutshell, (they have) taken a scrap trailer and put a legal logbook to it. I did go to the police clearance offices and they advised me that I cannot drive this trailer on the road as they will suspend and impound it.”

Roadhog general manager Karl Rachman wrote to the bank that his company had examined the trailer and found the back link was manufactured by them in 2012. But the front link was not – it was manufactured by Ice Cold Bodies and displays their data plate with the Roadhog trailer’s VIN number.

“This is fraudulent and therefore we cannot be involved in any way with this trailer,” Rachman said. He’s since accompanied Munsamy to the pound and inspected the trailer again, finding the front link was poorly made, not fit for purpose – and was starting to tear because it cannot pull the back link.

Munsamy’s further investigations have found the trailer was scrapped in 2013.

On August 2, the police impounded it, noting that the trailer’s model was “unknown”, a clone and not manufactured by Roadhog. They won’t investigate the fraud though, telling him to get a lawyer.

“Ever since, I have given all info and proof to Standard Bank but they are not assisting me in any way and they are still making me pay for this trailer every month. It is not fair to me as I am paying for something that is not legit and is basically scrap,” Munsamy said.

Not only is he having to pay for a trailer that’s been pulled off the road, he’s had to repair it numerous times – and he’s lost out on a contract to transport coal, which is devastating for any small business. “I cannot stress to you the financial difficulty this has put me in. Transport is my bread and butter and due to this trailer not working, I obviously cannot earn an income. This has put me in a tremendous financial crisis.”

Sticking with its story

Standard Bank’s backing Truck World: “We have received feedback from the supplier of the trailer, who has advised us as follows: the front portion of the trailer is a Roadhog trailer; this front portion was involved in an accident, and was repaired under an insurance claim; the repair was undertaken by Ice Cold Bodies; as the Roadhog original manufacturing plate was damaged beyond repair, Ice Cold Bodies fitted their own chassis plate to the trailer.

“In light of the above explanation provided by the supplier being Truck World, we are satisfied that there is nothing untoward that has occurred with this transaction, and accordingly wish to advise you that you should immediately secure possession of the trailer from the SAPS (we can assist in securing the release to yourself if necessary), and maintain your obligations under the instalment sale agreement.”

The bank told Munsamy that if he believes the “asset is defective in any way, you must engage Truck World in this regard and enforce your rights accordingly. But this will not absolve you of your obligations to ourselves.”

Truck World failed to respond by the deadline, and when reminded, said it was working on a response, which will be sent in seven days.

Banks have a duty of care towards their customers, which includes protecting them from fraud. Since the customer was injured in this deal, it cannot simply step away from the deal. So I contacted the Banking Ombudsman, Reana Steyn about the matter.

She said since the deal was financed by a bank, her office is empowered to adjudicate on the matter. “The consumer has common law protection and the CPA would certainly also apply in this case.

Article by Georgina Crouth is a consumer watchdog with serious bite. Write to her at [email protected], tweet her @georginacrouth and follow her on Facebook. It first appeared on IOL

Durban TPT concedes that trucking delays are a big challenge

How to fake truck driving experience?