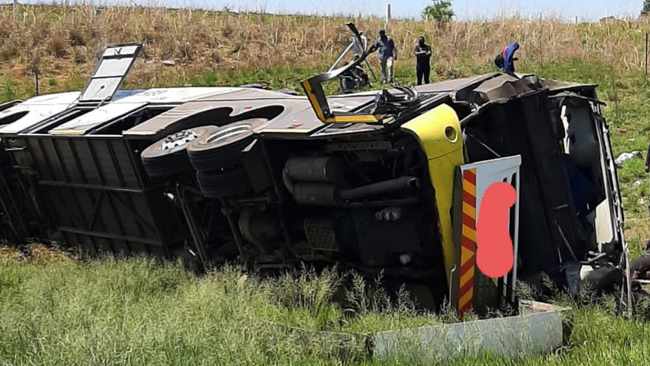 Eldo Coaches have blamed a front tyre burst for the fatal bus crash that killed nine people on the N3 near Tugela river on Tuesday morning.

Paramedics said that a baby was among the nine people that died when the bus driver lost control of the long-distance bus and crashed.

Paramedics said that the bus rolled several times ejecting passengers in the process.

KZN police spokesperson, Colonel Thembeka Mbele, said it is alleged that on Tuesday at 11:40am, a bus with passengers was travelling on the north bound when it veered off the south bound on Tugela Bridge and overturned.

“A case of culpable homicide has been opened for investigation at Colenso SAPS,” Mbele said.

“A total of 60 people were treated on the scene and have been taken to hospital for further care,” MacKenzie said.

Eldo Coaches is deeply saddened to inform the public of an accident involving one of our coaches on Tuesday 12 October 2021 at approximately 11h00.

The coach departed from Durban Station at approximately 06h45 on Tuesday 12 October. Operating Service Number 3352 was travelling to Johannesburg.

We are doing our best to assist all passengers that were on board. All Emergency and Medical services are present on scene.

We are currently getting in touch with all emergency contacts of the passengers that were on board.

According to information at hand, the accident was caused by a blowout of the front wheel tyre and the coach rolled.

We are cooperating fully with local authorities to ensure that the accident is thoroughly investigated.

This is an active incident, we will update the public as soon as we receive any further information.

Eldo Coaches assures all of our ongoing support.

Anyone who had family or friends on the coach, who wishes to contact us can kindly do so on the following numbers :

One person died and four others were injured when the vehicle they…
Truckers Association of South Africa (TASA) is planning to protest this morning,…