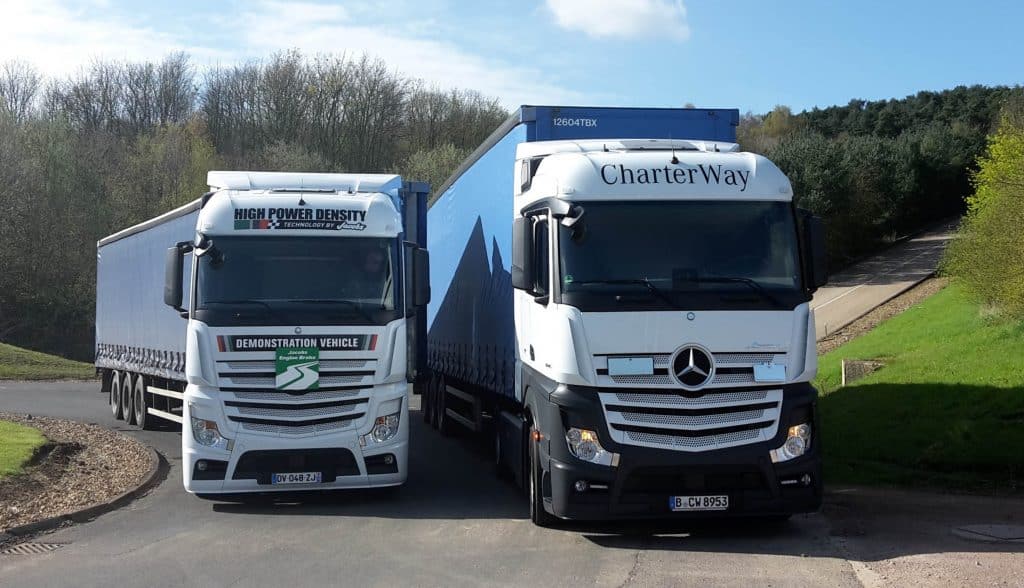 Engine braking on the double

Truck technology has advanced rapidly in recent years, with engine downsizing, improved aerodynamics and reduced rolling resistance all helping to improve fuel economy and reduce emissions. However, these improvements have tended to come at the expense of engine braking systems.

Jacobs Vehicle Systems has been developing a new version of its long-serving Jake Brake to provide significantly improved performance from the engine braking system, as well as greatly reducing noise.

Although its distinctive loud chattering noise is often unwelcome in urban environments, engine braking has long provided superior secondary braking performance to hydrodynamic or electromagnetic retarder systems. The Jacobs Jake Brake is fitted as standard to a number of Euro-VI engines, such as the 12.8-litre OM471 in the Mercedes Actros range and the PACCAR 10.8-litre MX-11 and 12.9-litre MX-13 units used by DAF.

Now Jacobs has previewed its next-generation Jake Brake in the UK for the first time. Engineers from a host of European truck and engine manufacturers were invited to Millbrook Proving Ground in Bedfordshire recently to experience at first hand a prototype of the latest High Power Density (HPD) Jake Brake in action. Transport News Brief joined them.

The HPD brake is not yet in production but is described as “production-ready”. It follows the established “compression release” principle to produce braking torque, but manages to more than double braking performance at low engine speed. The HPD brake, it is claimed, can produce as much braking effort at an engine speed of 1,400rpm as a conventional Jake Brake can at an engine speed of 2,100rpm. It does this courtesy of a clever adaptation of the established engine-valve control mechanism, bringing inlet valves as well as exhaust valves into play when the brake is activated and thus doubling the number of piston strokes on which braking is available. In effect the HPD system delivers two-stroke braking from a four-stroke engine.

Whereas a conventional engine brake has one compression release and one brake gas recirculation “event” per camshaft rotation, the HPD system offers two braking events per cam rotation.

The latest generation of disc brakes, complete with autonomous emergency braking systems since last October, may have virtually consigned old drum brake problems such as overheating and fading to the history books, but ever-increasing truck weights and the aforementioned efficiency improvements have meant that strong secondary braking performance is as important as ever.

The demonstration at Millbrook compared a Mercedes-Benz Actros fitted with the conventional Jake Brake with a similar Actros equipped with the prototype HPD version.

The prototype HPD system was notably quieter in its operation and provided much more effective braking at low engine speeds. This was perhaps best illustrated on one of the steepest gradients on Millbrook’s hill route: a 350-metre down slope including 100 metres at 21%.

Unsurprisingly, at 40 tonnes GCW, the truck with a conventional engine brake needed a couple of gentle dabs on the footbrake to keep speed under control on this degree of slope, even with the Jake Brake set at maximum engine braking and the gearbox downshifting a couple of ratios to keep engine speed up. With the HPD-equipped truck, however, the engine brake alone was powerful enough to control speed on this sharp downhill stretch.

Jacobs claims that the HPD brake is the culmination of more than five years of development work, and came about after the company identified several trends in truck design which were reducing the effectiveness of existing engine brake designs and were likely to have a big impact on the company’s core Jake Brake product.

Disc brakes were getting better all the time. Vehicle operators and manufacturers were demanding better retardation in general. Truck gross weights were tending to go up, whereas both rolling resistance and air drag were tending to fall, with the advent of low-rolling-resistance tyres, low-friction lubricants, and better aerodynamic efficiency from trucks and trailers. The upshot is that newer trucks tend to maintain speed for longer when the driver’s foot comes off the accelerator pedal: good news for fuel economy, but not so helpful for any secondary braking system. But perhaps most significant of all was the growing tendency for truck engine downsizing.

The Jake Brake’s operation has always depended on pressure build-up in the engine’s cylinders. It is the sudden repeated release of this pressure that causes the engine brake’s distinctive noise. The maximum cylinder pressure in a 13-litre engine with a conventional Jake Brake is about 80bar (1,100psi).

Steve Ernest, Jacobs Engineering and Business Development Vice President, calculated that engine downsizing would mean that the cylinder pressure would have had to have been increased to over 100bar (1,450 psi) just to maintain the existing level of engine brake performance. This was key to the company pursuing the idea of two-stroke braking, which ultimately led to today’s HPD.

Pulling up at one of the many pit stops along the N1,…