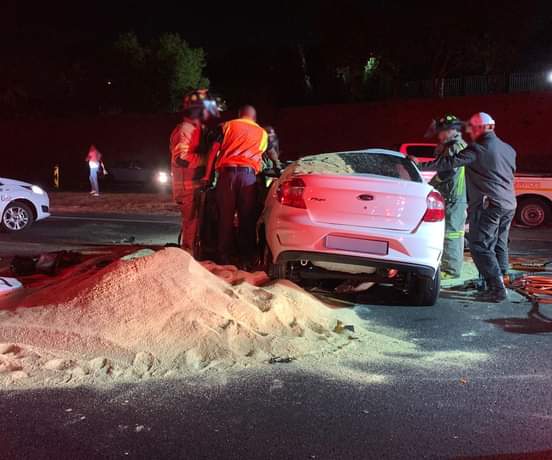 Pretoria – Six people, beleived to be all family members perished on the spot when their car collided into a truck on the N4 near the Rossouw offramp in Die Wilgers, Pretoria last night.

Three adults and three children sadly died on the scene.

ER24 and Tshwane Fire Services arrived to find a wrecked light motor vehicle in the middle of the road. A pile of grain was spread over the vehicle and the road.

On closer inspection, medics found a man and woman lying trapped inside the front of the vehicle.

An elderly woman, two boys and a girl, believed to be aged three, eight and twelve, were found seated in the rear of the car.

Assessments showed that, unfortunately, all six patients had already succumbed to their numerous injuries.

Nothing more could be done for the patients, and they were declared dead.

It is understood that the car had crashed into the truck that had allegedly performed a u-turn on the road.

The details surrounding this incident are unknown, but local authorities were on the scene for further investigations.