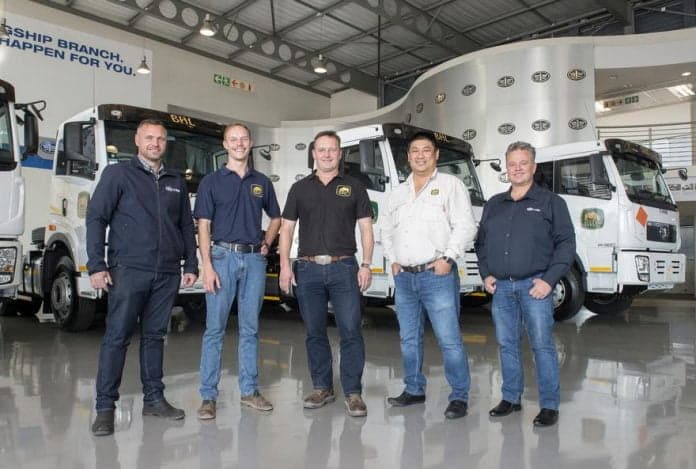 The partnership between FAW Trucks and Buks Haulage Limited (BHL) stretches back over almost a decade, starting with the purchase of 85 first-generation 26.380 units in 2012.

Today, BHL owns around 200 units from FAW Trucks and plans to expand its fleet as its business on the African continent continues to grow.

Tested to the limit

Since that initial purchase in 2012, Buks van Rensburg, the CEO of BHL, has sung the praises of FAW Trucks on numerous occasions and says that the products from FAW have played a significant part in the success of the company, which was established in Zambia in 2004.

“The treacherous and unpredictable road conditions one encounters in Zambia and other African countries will test any truck to its limits,” says Van Rensburg.

“We own a fleet of 300 trucks from various brands, but the robust products from FAW Trucks have consistently proven that they can cope in even the harshest conditions.”

According to Van Rensburg, BHL found that FAW trucks are robust and engineered to handle these conditions because they undergo stringent testing before being brought to market. In addition, the electronics on these Euro 2 compliant trucks are perfectly suited to the unique challenges of the African working environment.

“In 2012 I visited China with the aim of acquiring trucks for our operation in Zambia. However, upon my return I was contacted by a representative from FAW Isando, who had been made aware of my requirements and was convinced that FAW Trucks would be able to fulfil my business needs,” Van Rensburg recalls.

“I agreed to a meeting and was immediately impressed. Not only were the products from FAW Trucks well specced, they were also more than capable of handling the operating conditions in Africa. I placed an order for 85 trucks, many of which are still running almost 10 years later.”

BHL has been running 28.380FT side tippers to transport copper concentrate from mines in Zambia to the country’s smelters, and then to transport the beneficiated material over 2 400 km from the smelters to Walvis Bay in Namibia, from where it is exported to China. Raw material imported through Walvis Bay is then transported back to Zambia and the DRC.

BHL is one of FAW Isando’s many high-profile clients in the transport and logistics, construction and marketing industries who run fleets consisting of freight carriers and truck tractors as well as tipper and mixer trucks.

The common thread between them is that with a host of different engine capacities, payload allowances and body options on offer, businesses can rely on FAW Trucks’ products to get the job done.

The fact that all models carry a two-year/unlimited kilometre warranty adds further peace of mind and was also a factor in Van Rensburg’s buying decision.

“Growing one’s business is always a key focus, so BHL is constantly looking for new opportunities. In 2017 we commenced with the construction of a new road from Zambia to Walvis Bay, which shortened the route by some 220 km. This was basically a corporate social responsibility project for us as there was no financial assistance from government,” Van Rensburg explains. “Our efforts have paid off, though, as it has helped to grow our market share to around 60% along the corridor.”

BHL is also expanding its operations to Botswana and as such has acquired 35 additional 28.380 units to transport the roughly 5 000 tonnes of copper it expects to export from that country.

As before, the hardiness, driver comfort, accessibility and price of spares and excellent fuel consumption offered by FAW’s trucks were deciding factors in the purchase.

“Innovation is an important pillar of the BHL business model and here, too, FAW Trucks has been able to cater to our unique needs,” comments Van Rensburg.

“In 2011 we designed a custom trailer to transport sulphuric acid to our mining clients. Normally tankers deliver the acid to the mines and then return empty. Our design features two tankers, located at the front and rear of the trailer, with a tipper located between the two.

We can therefore take the sulphuric acid to the mine and then return with concentrate loaded on the tipper part. This means that the truck is never empty, which is extremely cost effective.

“FAW was the obvious choice because of its payload and relatively light weight, with the proven fuel efficiency as an added – and very welcome – bonus. It also has a positive impact on our carbon footprint and the number of vehicles on the road.”

Commenting on the commercial vehicle market in the rest of Africa, Van Rensburg points out that the market share of Chinese trucks in Africa was relatively small when BHL first started operations. Since acquiring its fleet of FAW Trucks models, however, the brand has become increasingly popular.

“Our company seems to have been quite a trendsetter in that respect,” Van Rensburg jokes. “Our competitors see how FAW contributes to our success and now most of them are also running fleets from FAW Trucks.”

FAW Trucks is able to provide this and more by bringing to market robust, high-quality vehicles at an attractive price.”

Van Rensburg is adamant that he will confidently recommend FAW Trucks products to anyone who is in the market for a commercial vehicle. “FAW listens to its customers,” he says. “It is always open to suggestions on how to improve its products and service and will put a great deal of time and effort into effecting those improvements.

“It is precisely this attitude which has seen FAW Trucks make great strides over the past ten years and I predict that in another decade Chinese brands will far surpass their more expensive European counterparts in terms of sales.”

FAW Isando dealer principal, Johan du Plessis, echoes this sentiment. “FAW Trucks has a clear vision of providing our customers with durable and affordable commercial vehicles and long-term service plans and support. When our trucks leaves the showroom floor after a sale, clients can expect long-term, dedicated services and 24/7 support, ensuring their investment gives them the returns expected of modern trucks.”

Van Rensburg is very proud of BHL’s South African roots and points out that this also creates a strong synergy with the FAW Trucks brand, which is proudly built in South Africa, for Africa. “FAW Trucks believed in the potential of BHL and took us on as a pilot customer, helping us to build our market share in the industry in which we operate. One could say that the two companies built their brands together.

“We look forward to a bright future and a continued partnership with FAW Trucks,” Van Rensburg concludes.