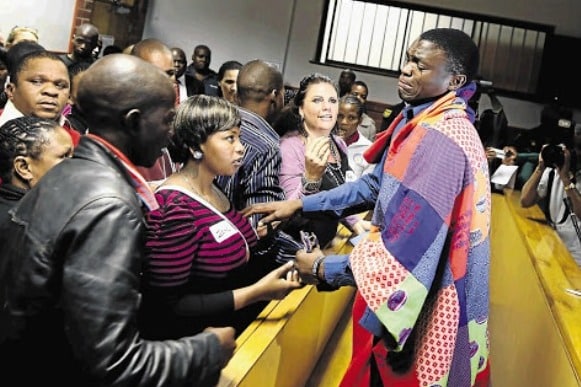 Durban – Sanele Goodness May, the driver of the Sagekal Logistics truck which killed 24 people on Field’s Hill, Pinetown in 2013 has been released from Umzinto Prison.

The truck that May was driving ploughed into four taxis and two cars killing 24 people at the bottom of Field’s Hill at the M13/M1 interchange.

May was convicted for culpable murder and sentenced to 8 years in prison.

Throughout his trial, May maintained that the truck’s brakes failed before it hit the vehicles.

However, he begged forgiveness from the victims’ families, despite them not blaming him for the crash.

The founder of the Sanele May support group on Facebook, Peace Piche, posted on Wednesday morning that May had been released from Umzinto Prison.

“It’s official – Sanele May has been released from prison. The day we have all been waiting for has arrived. There are no words to describe the elation and he even admitted this morning that it feels like a dream,” she told more than 13,000 members of the support group.

Piche thanked all the people for their support through May’s incarceration.

The owner of Sagekal Logistics, Gregory Govender, was fined R2,000 for failing to maintain a roadworthy vehicle, and R5,000 for hiring May, who was not eligible to work in the country.

May’s release comes at a time when there is much talk about a case of a driver who killed two JMPD officers but escaped jail time.

On the count of driving under the influence of alcohol, he was given an option to pay a R10,000 fine or serve one year in prison.

The sentence outraged the deceased’s families, fellow JMPD officers and the public has been complaining about the outcome.

“If you have money, you don’t go to jail, this is so unfair to us as a family,” said a sister of one of the deceased traffic cop.

This website uses cookies to improve your experience while you navigate through the website. Out of these, the cookies that are categorized as necessary are stored on your browser as they are essential for the working of basic functionalities of the website. We also use third-party cookies that help us analyze and understand how you use this website. These cookies will be stored in your browser only with your consent. You also have the option to opt-out of these cookies. But opting out of some of these cookies may affect your browsing experience.
Necessary Always Enabled
Necessary cookies are absolutely essential for the website to function properly. These cookies ensure basic functionalities and security features of the website, anonymously.
Functional
Functional cookies help to perform certain functionalities like sharing the content of the website on social media platforms, collect feedbacks, and other third-party features.
Performance
Performance cookies are used to understand and analyze the key performance indexes of the website which helps in delivering a better user experience for the visitors.
Analytics
Analytical cookies are used to understand how visitors interact with the website. These cookies help provide information on metrics the number of visitors, bounce rate, traffic source, etc.
Advertisement
Advertisement cookies are used to provide visitors with relevant ads and marketing campaigns. These cookies track visitors across websites and collect information to provide customized ads.
Others
Other uncategorized cookies are those that are being analyzed and have not been classified into a category as yet.
SAVE & ACCEPT
Total
35
Share
35
0
0
0
0