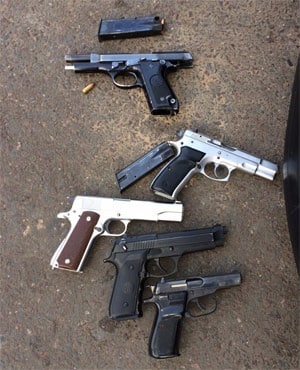 Cape Town – Five alleged car hijackers have been arrested, and a number of firearms seized, after a shootout with police in Khayelitsha, Western Cape police said on Friday.

As they cautiously approached the vehicle, it stopped and the doors flung open.

The five men jumped out and started firing at the officers. They returned fire and the gang scattered in different directions. One suspect was wounded.

“After further investigation by the members two more firearms were recovered in a shopping bag on the roof of a shack in close proximity of the scene, namely a 9mm pistol and an Uzi semi-automatic rifle.”

Independent forensic ballistics expert Wollie Wolmarans said on Friday he believed most firearms used by criminals were stolen from the police, military or private citizens.

“There are also some cases where criminals have broken out a safe fastened into a wall and taken it with them. If they want firearms and they know you have got it, then they will break out with it.”

While criminals often filed serial numbers off guns to avoid tracing, it was possible to recover the numbers via magnetic and etching processes.

The men arrested on Thursday, aged 26 to 35, were from Khayelitsha and Kraaifontein.

The wounded man was being detained in a hospital under police guard and they would appear in court once charged.