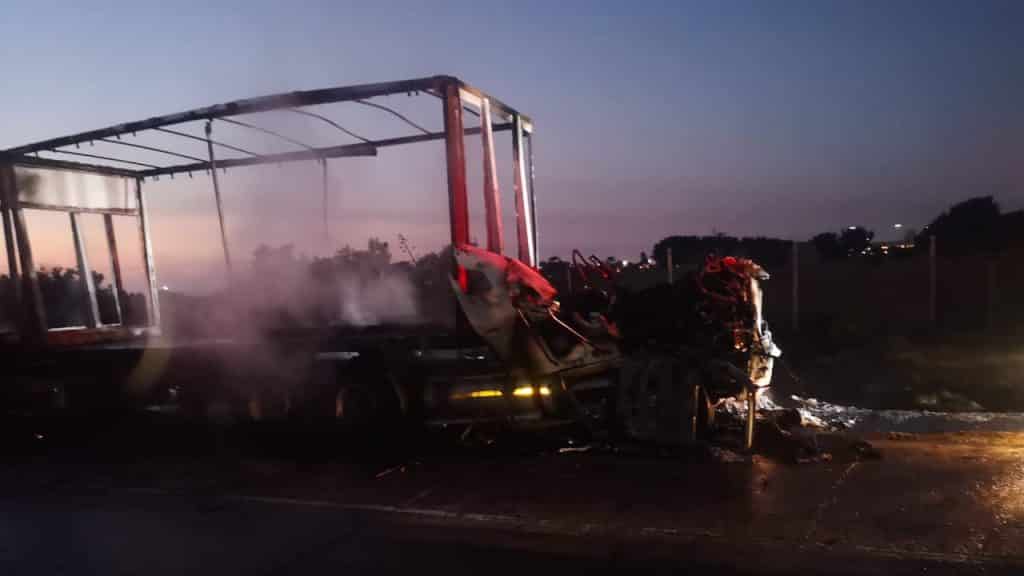 Foreign truck drivers are incensed by an article that they say is misrepresenting them in a very dangerous way. They have called it inflammatory at a time where peace seemed to have started to prevail.

SA Trucker received complaints from several truck drivers from Zambia and Zimbabwe who say that the organization quoted by City Press in their article was nonexistent questioning how they could believe the purported leader of an organization with no proof of membership.

The article quoted one Edward Muchatuta referred to as the leader of SADC Truck Drivers Association as saying that foreign truck drivers will retaliate if violence against them does not stop.

Amongst those who expressed their dismay was Durban based Zimbabwean truck driver Mr Dzingirai Nyere who said he belonged to Zimbabwean Citizens Coalition in South Africa (ZICCOSA).

“We are a peace loving people, we understand the frustrations with our South African fellow drivers and ZICCOSA has been engaging with ATDF directly to try and find an amicable solution, this retaliation thing does not work and should never be encouraged,” said Nyere.

Felix Mwanza, a truck driver from Zambia said, “I pray for peace to reign between locals and us foreign truck drivers, there is no point in the visitor threatening retaliation, we should learn to live with each other in peace.”

SA Trucker can authoritatively report that violence has subsided following the the formation of a task team to tackle the problems raised by the ATDF.  Several undocumented foreign drivers have been arrested. The police have not yet reported on the figures.

South African drivers and trucks may be barred from entering neighbouring countries in what could badly affect South Africa’s export industry if the spate of attacks on trucks is not contained soon, according to a regional truck drivers’ organisation.

“We need to engage as truck drivers and not reach a point where we’ll say: ‘Why must I allow your to drive in my country when you don’t want me to drive in South Africa?’” said leader of the SADC [Southern African Development Community] Truck Drivers’ Association, Edward Muchatuta.

A Zimbabwean national and a truck driver himself, Muchatuta shared his experience of living in fear for his life as the news of trucks being attacked and drivers being assaulted or killed spreads.

The incidents have been widely linked to grievances, which are not part of an ongoing engagement with the government and industry employers, that foreign truck drivers are employed more than their local counterparts.

Muchatuta struggles to explain the sense of relief he gets every time he drives his truck into Gauteng following a vigilant overnight trip on the N3 – the highway connecting Gauteng and KwaZulu-Natal and a hotbed of truck attacks.

“It is at that point where I can say that silent ‘thank God I am safe’ and that feeling is just too hard to explain … considering [that] some of our colleagues did not make it alive to their destinations.”

His face turns serious and he keeps quiet for a while, with his eyes fixed on the ground and hands resting on his waist.

“We have several truck drivers’ WhatsApp groups and this is where we get daily updates on incidents of truck attacks and see gruesome pictures of burnt and sometimes dead colleagues. I may not personally know the victims, but those messages send a shiver down my spine and if it continues it may spill into neighbouring countries where we may not be able to protect South African drivers,” he warned.

Last week, Muchatuta forwarded City Press a message which had been sent to foreign truck drivers.

“Any attack on any SADC driver in any SADC country and the SADC Truck Drivers’ Association will stop movement of that country’s trucks in other SADC countries until action has been taken by the relevant country,” the message read.

City Press caught up with Muchatuta in Durban on an early Wednesday evening while his truck was still being loaded with food supplies in an industrial area in Mobeni before he hit the N3.

He was about to cautiously navigate the notorious N3 back to Johannesburg with his eyes fixed not only on the road, but on the roadside – right from Pinetown before exiting Durban – where attacks have been reported.

Just over two weeks ago, Muchatuta had a close brush with death on the same road.

He said some men surrounded his truck after he had stopped on the N3 to relieve himself.

“I watched helplessly from a distance as they helped themselves to my belongings, including my wallet and cellphone, after I ran away on noticing them,” he said.

Unlike many others who have been killed, assaulted or had their trucks torched, Muchatuta considers himself lucky as he managed to get back behind the wheel after the men had left.

“I was really lucky that they could see me but I wasn’t shot at or anything like that. And the truck was not damaged. It has been hard driving to and from Durban and Johannesburg in recent months.”

Acting chief executive of Road Freight Association Gavin Kelly revealed in an interview on Cape Talk radio more than a week ago, that 213 deaths were recorded following incidents of attacks on trucks nationally since March 2018.

He said, however, it could not be ascertained if the deaths were all linked to the unhappiness over the alleged high employment of foreigners or if it was due to service delivery protests or pure criminality.

South African truck drivers have made it clear that they are not happy with foreign nationals being employed in high numbers over locals in the trucking industry.

An organisation known as the All Truck Drivers’ Forum (ATDF) has been leading the campaign to have more South Africans employed but it has denied any involvement in the spate of attacks on trucks.

The ATDF has reiterated the government and the trucking industry’s calls for those involved in these attacks to be arrested.

“As ATDF; we’re not attacking trucks, we’re not looting or burning any trucks. We’re engaging and fighting for our jobs,” said the ATDF chairperson, Sipho Zungu.

“We can’t be fighting for our jobs and burning the tools at the same time. Those who are doing that are tainting our image and derailing our campaign…they must stop embarrassing South Africans.”

Their cause, Zungu said, was to stop employers from employing more foreign nationals over South Africans.

“South Africa must look after its own first … I mean a father can’t buy groceries for a neighbour while his own family starves. I don’t know why employers hate South Africans like this,” he said.

Zungu claimed that one of the reasons foreign nationals were favoured over locals was because they were “exploited” by employers.

“They accept meagre salary offers, work overtime and are not paid for it. South Africans have rights. I was fired as a truck driver for challenging the employer on my rights as a worker.”

He said foreign nationals were accepting a nett salary of about R8 000 while the locals expect employers to pay drivers about R20 000, which includes a meal allowance, sleep out and overtime, among others.

An unemployed Zimbabwean truck driver, Timothy Rukombo, agrees with Zungu about the exploitation.

“The salary is very low but do we have a choice? We’re forced by circumstances to accept whatever is offered because we have families to support here and back home,” said Rukombo.

Rukombo, who has been in South Africa since 2001, has a problem with the violence.

Zimbabwean Timothy Rukombo is not working
“I hate the violence. It is true that we accept anything with truck owners taking advantage of our situation because most immigrants are desperate for jobs, but why choose to resolve all this through violence?”

Rukombo, who lives in Inanda township in Durban and has been delivering containers from the port to local customers, said he could not work anymore after his immigration papers vanished from his truck.

He confirmed that some truck owners were employing undocumented foreigners.

“As long as you have a licence, they will give you a truck and you can work,” he said.

Dayson Mukwewa, also a truck driver from Zimbabwe, said his company had suspended the N3 route due to the violent attacks on trucks and he was now only doing the Johannesburg to Cape Town route.

“Still, the N1 is not that bad but we’re scared. Hopping on that truck not knowing if you will be back home safe, when and where you will be attacked is not easy,” Mukwewa said.

“The only way to avoid being attacked is not going to work but that cannot be good as we have mouths to feed and the employer also has contractual obligations to deliver on. We need a speedy resolution to this whole thing before it gets out of control.”

Meanwhile, a government interministerial task team has promised to continue engaging with the aggrieved group and employers.

A rapid response team will be deployed to hotspots in a bid to curb the attacks.