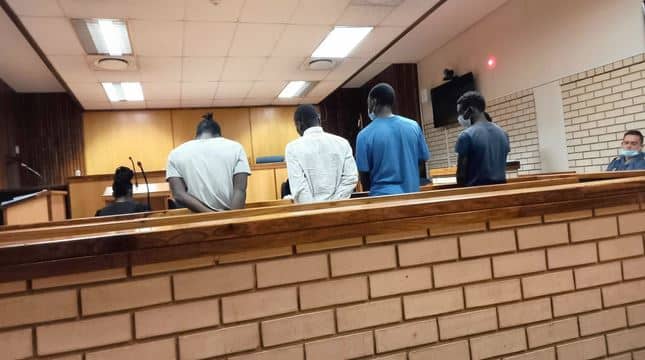 Four more suspects linked to attacks on motorists on the R80 have appeared at the Pretoria North Magistrate’s Court.

Prosecutors from the National Prosecuting Authority plan to prosecute the cases of all nine suspects, linked to the highway crimes that stirred the emotions of residents travelling to and from the northern reaches of Tshwane.

The accused are being charged with a range of offences that include murder, attempted murder, kidnapping, assault with intent to grievous bodily harm and armed robbery.

State prosecutor, advocate Zachariah Mahlatjie, said they had added Rodwin Maphinde as a new suspect among the four who appeared last week, and all suspects would return to court on Monday next week.

He said the police were still verifying the immigration statuses of the new suspects – with only one being a South African.

The four who appeared last week will have an additional charge brought against them for being in South Africa illegally, as the Department of Home Affairs confirmed they do not have the correct paperwork.

A group of motorists, led by tow truck drivers, blocked the highway two weeks ago, calling for police action to end the spate of attacks by suspects – who attacked with stones in Theo Martin’s Poort.

Police spokesperson Brigadier Mathapelo Peters said: “A number of other victims have come forward in the past week, some with registered cases and some with no cases, which were subsequently registered.

“The close collaboration between police and the victims, in the prosecutorial-guided investigation, has led to the arrest of four suspects – with three of them linked to a murder reported at Akasia SAPS in September.”

This, he said, brought the total number of arrests to nine.

The fourth suspect, a 19-year-old, has been linked to two armed robberies, one reported in Pretoria North in May this year and a second incident reported at Hercules Police Station in August.

“The hard work by the team of investigators and the results will not only bring to a screeching halt the reign of terror by criminals, in the vicinity of the Theo Martin’s Poort (in the Magaliesberg area) along the R80 Mabopane Highway, but will also take us a long way in restoring public confidence in the SAPS,” said Mawela. – Pretoria News

Durban – A truck driver have been burnt and seriously hurt while…