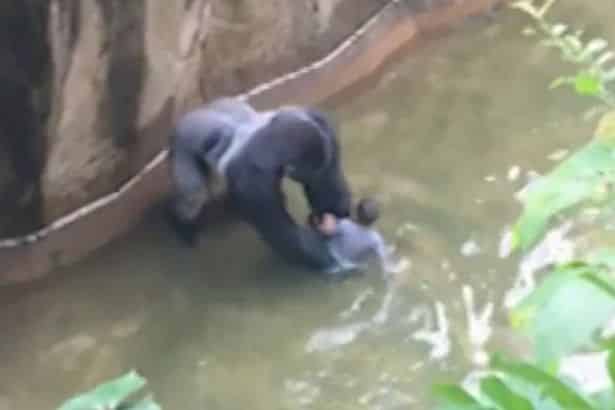 An endangered gorilla had to be shot dead by zookeepers after a four-year-old child fell into its enclosure.

A special response team were forced to shoot and kill the gorilla – named Harambe – at Cincinnati Zoo after the boy fell 12 feet into the pen and was then grabbed by the animal, reports The Mirror.

Harrowing footage of the incident has been posted to YouTube showing how the child was dragged around for ten minutes before keepers were able to deal with the situation.

After Harambe was put down, the child was taken to Cincinnati Children’s Hospital Medical Centre and is said to have no serious injuries.

However, zoo bosses admit the child was in ‘a life-threatening situation’ with director, Thane Maynard, saying they had no choice but to put the 17-year-old, 400-pound gorilla down.

They made a tough choice and they made the right choice because they saved that little boy’s life. It could have been very bad.
An investigation into the incident is now underway although an initial reports claim the child crawled through a barrier before falling into the moat area.
Mr Maynard said this was a ‘a very sad day’ stressing it was the first time his team had been forced to kill one of their animals in such an emergency situation.