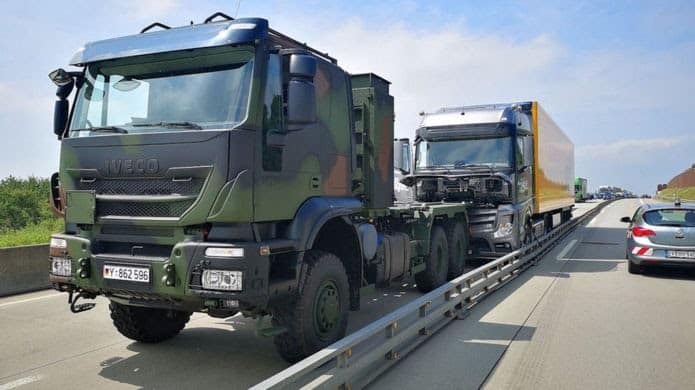 Soldiers in the German army prevented a potential motorway disaster when they brought a runaway lorry to a halt after its driver collapsed in his cab.

They realised there was a problem when they saw the lorry collide with the central reservation on the A4 autobahn near Gera in eastern Germany, BBC reported.

The lorry was going slowly through roadworks but they feared an accident.

One of the soldiers tried to clamber into the cab and when that failed they drove in front of the lorry.

A doctor was quickly on the scene but the driver, 67, later died.

“Corporal Christopher Seidel and I were heading towards Dresden on the A4 when we saw a 40-tonner in front which drove into the central reservation and then came back into the lane,” Staff Sergeant Friedemann Frischko told DPA news agency.

Two other soldiers driving behind them then drove past the lorry and realised the driver was unconscious.

One of the pair in the other army vehicle tried unsuccessfully to climb into the cab. When he failed, Staff Sergeant Frischko drove in front of the lorry and started braking, to bring both his own vehicle and the driverless truck to a halt.

Trucker dies on his birthday after suffering heart attack while driving

“I thought I could manage it – after all I wanted to stop something more terrible happening,” he said.

Not so long ago an Eastern Cape trucker, Johan Buys, was hailed a hero even in death after he suffered a heart attack while driving but still managed to pull off the highway before he died.

Buys was a season trucker and very popular in the trucking fraternity. He died on his birthday😭