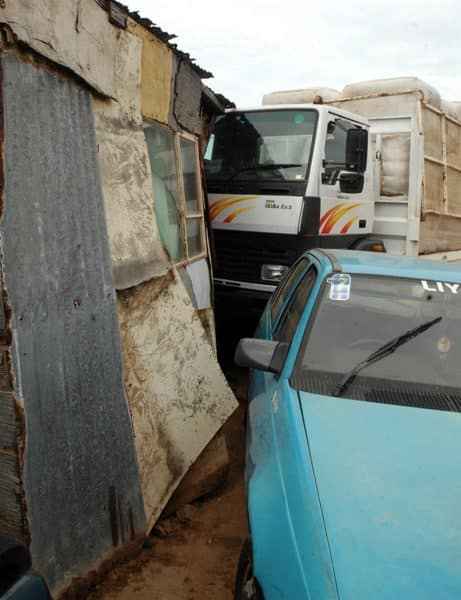 A HIJACKED truck spoiled a steamy bedroom session when the driver lost control and plunged into two shacks and a parked car on Saturday morning.

A 28-year-old woman told Daily Sun: “I saw the truck leaving the road at about 6am. The driver jumped out while it was still moving and ran away.

“Then I heard a loud bang as the truck hit a steel gate before swerving and ploughing into two shacks. People were screaming and then I saw two naked people who looked shocked.”

One of the victims, Bulelani Makaza (32), said the truck spoiled a good sex session.

“My girlfriend and I were having a nice time but suddenly we heard a bang and the shack walls fell on top of us. We kicked the zinc out of the way and screamed for help.”

His sister, Limise (39), said: “I thought I was dreaming when the truck crashed into my brother’s Opel before smashing into his shack and then mine.

“I’m worried because we were supposed to go to Somerset East to visit our parents, but now the car is damaged. We don’t know who will rebuild our shacks.”

Gogo Regina Nyenga (75), a neighbour, said she was shocked to find 12 bags of sheep wool dumped in her yard.

“I have been telling my children to fence my yard but they don’t listen to me.”

Captain Andre Beetge said: “The wool truck was hijacked in Uitenhage. The truck and some of the wool was recovered after it crashed into a shack in Govan Mbeki. No one has been arrested yet.”

Durban – Seven people are expected to appear in the Howick Magistrate…