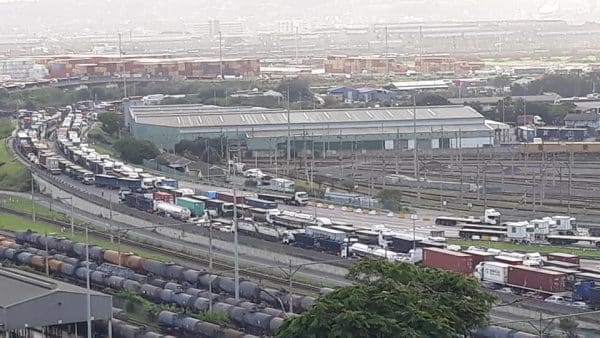 Durban – Operations at the Durban Container Terminals are operating again after computer problems caused a huge backlog of trucks outside the port this week.

On Friday, the trucking backlog persisted with South Coast Road junction bearing the brunt of the traffic congestion. Since Tuesday, heavy duty trucks carrying different cargoes, liquids and gas had made Bayhead and adjourning roads a no-go zone because of the backlog at the terminal.

Transnet had urged transporters not to send import-collection trucks to Piers 1 and 2. It told freight companies that the TPT Navis system was experiencing technical difficulties, and some landside operations had stopped since Tuesday afternoon.

The system was re-booted on Wednesday and operations continued.

The terminal is now trying to clear the backlog created. Sue Moodley, chairperson of the Harbour Carriers Association, said the loss just to road transport equated to R10million for the day.

“Other players in the logistics chain were also negatively impacted as their cargo would not have reached its respective destination. The fatigue suffered by the drivers due to waiting in these queues poses a risk,” she said.

Durban metro police spokesperson Parboo Sewpersad urged transporters in contact with the port operations on a regular basis to pull their trucks back when they became aware of the problems. “If there are problems in the port, it affects traffic management on the outside. Police are doing their best to alleviate congestion in the future.”

Gavin Kelly, chairperson of the Road Freight Association said obviously there is huge frustration within the Industry as this is not the first time it has happened – despite assurances from Transnet that the core issues would be resolved.

“We cannot carry on like this – a 14-hour delay causes backlogs on deliveries in and out of the port. A chain reaction starts to happen. Some operators are still working on the delays created. Shipping lines charge demurrage for delays. Some operators cannot claim those back so no how loads at a loss,” he said.