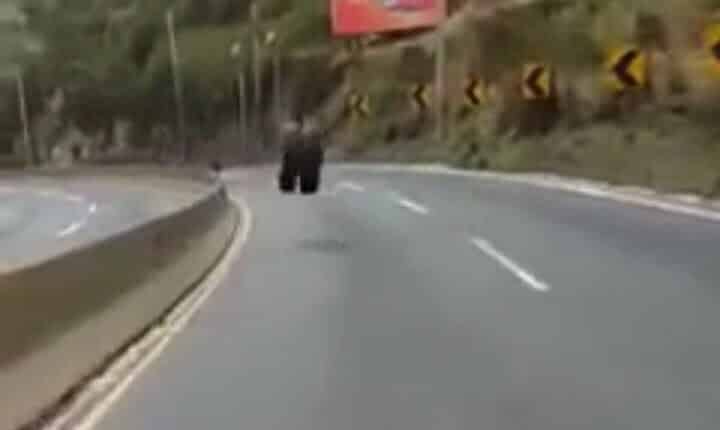 If you ever wondered what the purpose is for the concrete barriers separating carriageways, the video at the bottom of this page will illustrate for you.

It may also be interesting to know that the video was viewed more than 11million times in just 5 days after I posted it on SA Trucker Facebook.

What has made the runaway truck wheels video so popular?

Well, it has to be the battle between the heroic concrete barrier and the hell-bent wheels. From the beginning of the video, you can clearly see that the runaway wheels are in the mood to destroy.

The concrete barrier understanding the rage in the wheels stands its ground to protect motorists on the opposite carriageway.

Each time the wheels hit the concrete barrier, they come back with more vigour and determination. The wheels keep on gathering momentum, drawing viewers to want to see how it will end.

Fortunate enough, the runaway truck tyres are riding in the same direction as the traffic. Had it been contra-flow, they would have caused a very serious collision.

Imagine telling your insurer that you collided with truck tyres.

If the wheels can do exceptionally well by themselves, then it makes me wonder how we lose control of the whole car.

Another person wouldn’t help but mention a person squatting on the roadside, the tyres narrowly missed him.

Thabo Mashao had shared his observations on the one ‘behind the wheel’;

The driver of those wheels has great driving skills although I think he was a little drunk.

Rique Okoyoh thinks the runaway truck tyres had some beef which needed to be settled with some motorists but the concrete barrier stood in between, he wrote;

This tyre had some issue with motorists, struggles to jump over the Barrie to the other side with oncoming cars but God is great, all was in vein

PG Gonga had this to say;

I like the way it was taking those curves. Far much better than most Polo drivers