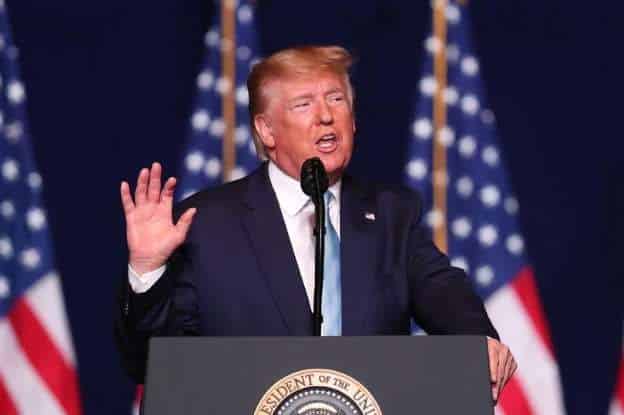 An $80million bounty has been placed on Donald Trump’s head in the wake of General Qasem Soleimani’s assasination, according to reports.

During the televised funeral of the top Iranian, official state broadcasters said one US dollar would be tabled for every Iranian in the country, with the cash going to whoever killed the US President.

“Iran has 80 million inhabitants. Based on the Iranian population, we want to raise $80million (£61million) which is a reward for those who get close to the head of President Trump,” it was announced, according to en24.

Soleimani, Iran’s preeminent military commander, was killed on Friday in a US drone strike on his convoy at Baghdad airport.

The attack took long-running hostilities between Washington and Tehran into uncharted territory and raised the spectre of wider conflict in the Middle East.

“We can attack the White House itself, we can respond to them on the American soil, he said according to the Iranian Labour News Agency.

“We have the power, and God willing we will respond in an appropriate time.”

He went on to say that “this is a declaration of war, which means if you hesitate you lose.

“When someone declares war, do you want to respond to the bullets with flowers? They will shoot you in the head.”

During an open session of parliament in Tehran this afternoon President Trump was called a “terrorist in a suit” after he threatened to hit 52 Iranian sites hard if Tehran attacks Americans or U.S. assets.

Soleimani was the architect of Tehran’s clandestine and military operations abroad as head of the Revolutionary Guards’ Quds Force.

U.S. Secretary of State Mike Pompeo said that if there were further Iranian attacks on U.S. targets, Washington would respond with lawful strikes against decision-makers orchestrating such attacks.

“The intelligence assessment made clear that no action – allowing Soleimani to continue his plotting and his planning, his terror campaign – created more risk than taking the action that we took last week,” Pompeo said on ABC’s “This Week” show.

The move to kill Soleimani has not been met with universal enthusiasm by Demoracts.

Nancy Pelosi, House speaker, criticised the manner in which the decision was taken.

She said: “This initiation of hostilities was taken without an Authorization for Use of Military Force (AUMF) against Iran, without the consultation of the Congress and without the articulation of a clear and legitimate strategy to either the Congress or the public.”

Police in Alberta, Canada are still working out exactly what happened to…

A Zimbabwean bus driver, Isaac Mukunura, who was involved in an accident…

This website uses cookies to improve your experience while you navigate through the website. Out of these, the cookies that are categorized as necessary are stored on your browser as they are essential for the working of basic functionalities of the website. We also use third-party cookies that help us analyze and understand how you use this website. These cookies will be stored in your browser only with your consent. You also have the option to opt-out of these cookies. But opting out of some of these cookies may affect your browsing experience.
Necessary Always Enabled
Necessary cookies are absolutely essential for the website to function properly. These cookies ensure basic functionalities and security features of the website, anonymously.
Functional
Functional cookies help to perform certain functionalities like sharing the content of the website on social media platforms, collect feedbacks, and other third-party features.
Performance
Performance cookies are used to understand and analyze the key performance indexes of the website which helps in delivering a better user experience for the visitors.
Analytics
Analytical cookies are used to understand how visitors interact with the website. These cookies help provide information on metrics the number of visitors, bounce rate, traffic source, etc.
Advertisement
Advertisement cookies are used to provide visitors with relevant ads and marketing campaigns. These cookies track visitors across websites and collect information to provide customized ads.
Others
Other uncategorized cookies are those that are being analyzed and have not been classified into a category as yet.
SAVE & ACCEPT
Total
89
Share
89
0
0
0
0