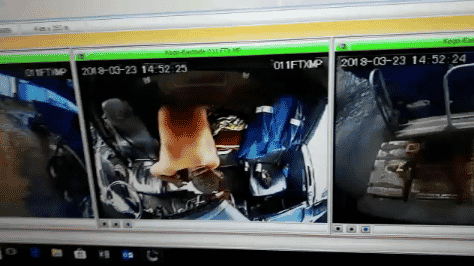 A leaked video of an unclothed truck driver purportedly captured on the truck’s drive cam has sparked a heated debate on social media. Fellow drivers are fuming at the yet unknown employer for allowing the video to leak under their watch.

The camera’s legality has always been a subject of debate considering their invasion of the drivers’ privacy especially when parked.

The cameras focusing on the inside of the cab are the main culprits and drivers cry foul because they are not allowed to block them even when they are changing.

In the recent video which was recorded on the 23rd of March 2018, a truck driver is seen preparing food while unclothed.

A man and a woman’s voices can be heard as they laugh and joke about the victim as they record a video from the CCTV screen.

The source of the video is still being investigated but the behaviour of the people who leaked it shows utter disregard of the victim’s privacy.

Trucking companies have always defended the use of the cameras to safeguard the driver and their property especially at the background of increasing truck hijackings.

Drivers on the other hand demand that they should have their privacy at certain times but they are still not allowed to block the cameras.

Two South African Police Service vehicles have collided on the corners of…
Strictly NO PASSENGERS of whatever sort and I happily obey. But this…