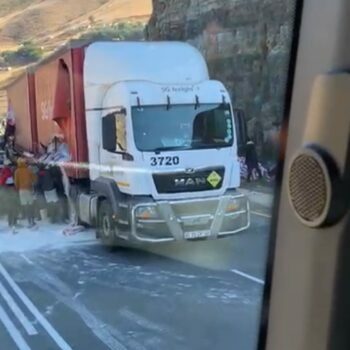 Looting of trucks on our freeways comes down mainly to poor policing in hot-spot areas, says Sewraj Gidhurpersadh, the owner of a security company dedicated to ensuring that heavy-duty vehicles reach their destinations safely.

Gidhurpersadh believes looting has fast become a popular trend because it was seen as a crime without consequences.

It comes down to inadequate policing and poor parenting, said Gidhurpersadh, who owns Aliwal Security.

With 152 cars and a staff complement of over 600, Gidhurpersadh said they were able to maintain a high presence, especially on the N1, N2, N3 and other major routes, including in Zimbabwe and Zambia.

“It is illegal for pedestrians to be on a national road. If this law was enforced steadfastly, there would never be looting incidents on freeways.”

Watch : Looters empty a Supergroup truck on the N2 near Kokstad

He also noted that it took hours for the Saps’ public order policing (POP) unit to attend looting scenes because once they were alerted, they still needed to congregate and receive a briefing before heading out.

“I’ve seen trucks emptied out in 30 minutes. Looters are not always poor people, and their mentality is usually that insurance companies will cover the cost of goods looted. The reality is that owners must first fork out huge sums of money (excess) to receive compensation.”

With trucks required to run for 24 hours, he said the hijacking and looting was done in a cowardly way.

“They slow a truck down enough to incapacitate it by pointing a gun at the driver, cornering it or even petrol bombing it,” said Gidhurpersadh.

He said antagonists use their vehicles to slow trucks down to a halt, and others climb on and cut off the truck’s air pipes. Once this is done, the truck can’t move.

“It is very organised. You will then get dozens of bakkies, taxis and others looting. Even some truck drivers on the opposite carriageway of the freeway, stop to loot.”

Gidhurpersadh said his customers had a direct line to them.

“Clients know, even if they have a breakdown, they must first call security to secure the vehicle, if not there will be no truck to fix.

“We have heavily-armed personnel who attend scenes in a large team to hold the crowd back. The idea is to get there before the looting begins because, once it starts, it is a free-for-all, and we are not permitted to use live ammunition.”

He said some of the looting hot spots include Mooi River in KZN, Harrismith in the Free State and Vosloorus in Gauteng. – The Sunday Tribune