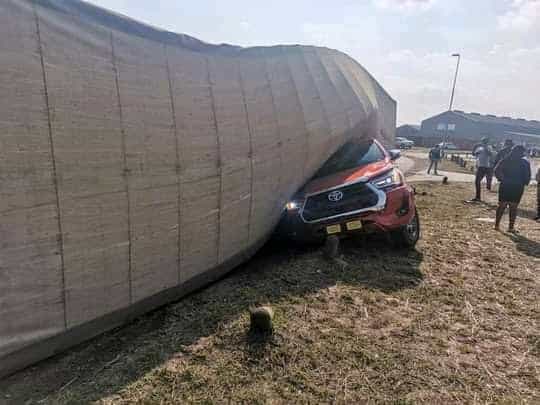 A motorist narrowly escaped death when a truck pulling a tautliner superlink overturned and landed on top of his bakkie in Richards Bay on Thursday morning.

The accident happened around 11h30 on Alumina Allee street, Alton in Richards Bay.

It is alleged that the truck driver failed to negotiate a sharp bend and lost control of the truck.

The truck overturned and landed on top of a Toyota double cab bakkie.

Fortunately, the bakkie driver was not injured.

The truck driver is also uninjured, but shocked.

Motorists are urged to avoid the route owing to a major diesel spillage.

All services are on scene.

Truck overturned on top of Double cab bakkie with occupants inside. pic.twitter.com/aB1YiJTB1L