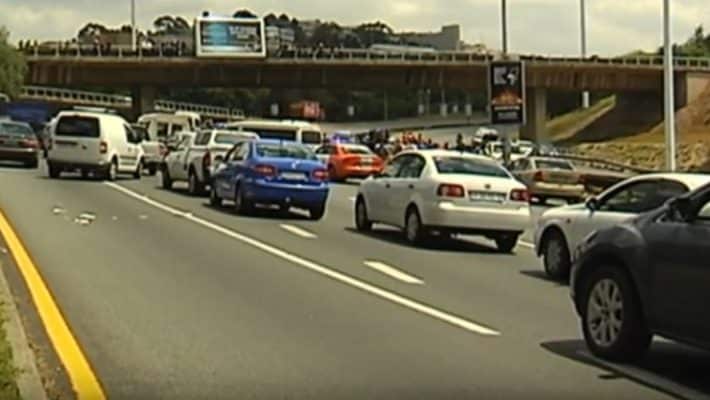 Johannesburg Metro Police have urged motorists to drive with caution on the M1 south bridge at the Booysens off-ramp after part of it collapsed on Wednesday.

JMPD spokesperson, Xolani Fihla says the bridge is still open to traffic but safety has been compromised.

“Johannesburg Roads Agency has been contacted to come and assess the damage and if necessary to go-ahead to close the section of the bridge.” Fihla added.

“Part of the structure under the M1 south Booysens off-ramp has broken off and it has compromised the safety of the bridge above. At the moment the traffic is flowing smoothly and the JMPD officers are on the scene.”

Fihla says police will constantly monitor the situation while waiting for engineers to assess the damage.

The scaffolding around the under-construction bridge caved in over the M1 highway.

The findings of the 14 October 2015 M1 bridge collapse against the main contractor, Murray & Roberts Construction (MRC), are damning.

According to Citypress, incompetence, missing bolts and all-round negligence were cited as grounds for prosecution, but no individuals were been implicated.

Johannesburg Development Agency (JDA) has refused to release the outcome of the report.

Cape Town – If the City of Cape Town has its way,…
Head-on crashes are one of the deadliest type of motor vehicle collisions…

Cows on the N3 between Pinetown and Pietermaritzburg is a serious problem.…